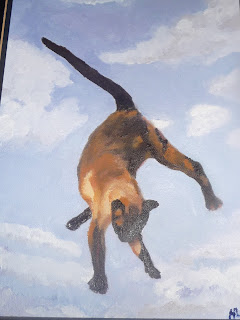 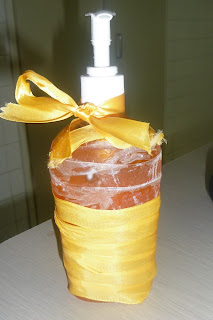 Someone is barbecuing in the park outside our building and our house smells like charcoal. It’s a smell that makes me think of camping. It’s been awhile since we’ve had truly barbecued food. I’ve learned to broil steaks and pan fry chicken , but sometimes I miss having grill marks on my food.
I’m doing everything possible to put off cleaning my bathroom today. After shopping and getting Coryn down for a nap, I put away the groceries, emptied the dishwasher, and folded some laundry. All of which needed to be done, but none of which were the bathroom which is my specific chore for the day. I also invented a few chores, wrapping Matt’s Father’s Day presents and writing in his card and decorating a liquid soap dispenser . . . In a way that looks like my two-year-old did it.


Our soap dispenser broke a few months ago, and the one we bought to replace it broke almost immediately. Shortly thereafter I discovered some “Bath and Body Works” foaming soap for sell, and bought four of them, even though we had a Costco sized container of liquid soap under the sink (but no dispenser to put it in). Foaming soap is so luxurious, especially in scents like “kitchen lemon.” Coryn likes it. I like it. Matt seemed to think using it was taking away from his manhood, though, and wanted me to buy some cheap soap.
“But it was on sale!” I pointed out. Now, however, we are down to the last bottle of the stuff, so today, I went and purchased a bottle of dial liquid soap which we should be able to refill over and over again. I pealed off the “Dial” and product information stickers and started to look around for some stickers of my own. I couldn’t find anything except some fabric glue and my collection of cloth ribbons I use for wrapping presents. I selected a shear ribbon and wrapped it around half of the bottle. Then I ran out. So I wrapped a yellow ribbon around the bottom half. I’ll see how it looks when it dries, but I’m not hopeful. Maybe I could crochet a something like a tea cozy except smaller to pop over it.
Matt has a very practical style, and most of the large items in our home reflect this. If we made the decision together, he normally gets his way, so we have a lot of dark wood and square shapes in our furniture. My style is more whimsical, and everything else is that. There are the unintentionally abstract pictures I painted myself from the cat falling from heaven picture in our bed room to the messy rose petal portrait in our living room. I did take a community college art class, but our instructors method of teaching was to walk around eating a sandwich while complaining about then president Bush to his favorite students (ie ones who agreed with his politics) while the rest of us just sat and did whatever we wanted. Literally the only requirements for grade in his class were attendance and to “produce one piece of completed art.” I was at the productive table. I completed four in the time I hung out there, all the while wondering why I was paying for the whole thing. The only three things I got out of the class was some help with color mixing, some perspective hints (given by the teacher’s aide instead of the teacher himself), and a ten percent student discount at my local art store for the semester. Experiences like this really killed any inclination I had towards getting any sort of a degree.
Though that wasn’t the point I started to make. I was going to talk about how I sneak playful whimsy into our home design in the form of a ridiculous number of cat themed knickknacks and hanging quilts on walls.
My husband is uber-practical. He complains about my green towels because they don’t get as clean as the white ones in the laundry and he thinks they smell musty because of it. He really doesn’t want to paint walls any color other than off white, and he is constantly crusading against the clutter on my desk. All pretty down to earth for a guy who spends most of his hours flying a tamed dragon around the imaginary kingdoms of the World of Warcraft.
I’m hoping today to incorporate pictures into this blog for the first time. I haven’t really figured out that feature yet. . .
Well, I took a break and got my bathroom clean and started another load of laundry. Coryn will be up in about forty-five minutes. We’ve started a bad habit of watching Spongebob every evening, so she’ll want to do that and then we’ll see where the evening goes from there. Buenos tardes!