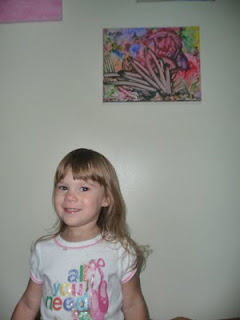 The other night I got out my last blank canvas and let Coryn cover it in finger paints. I had been saving the canvas for a significant project, but the proper subject never presented itself . . . and also using oil based paints in this tiny apartment has contributed to the decline of our carpets, and no matter where I try and store my drying masterpieces, Coryn seems to get her fingers on them . . .finger paints come out of fabrics a lot easier.

Coryn has a steadiness to her which I admire. Unlike some children I've known who scratched out a few lines and then want to move on to a fresh piece of paper, Coryn will spend forever on one picture. She sometimes takes it too far. Coryn has a well recorded history of “over-crafting.” The paper will reach a saturation point and she'll literally brush holes through it. I usually have to take projects away from her to stop her from just gobbing on more and more paint or stickers or glue.

She covered every inch of the canvas, and then recovered it, then swirled her fingers through it, then reached for more paint. Finally I called it quits and placed her art work out of reach to dry. I lifted her up to show her where it was sitting.

“It's beautiful,” she said, matter of factly. The next day we hung it on her bedroom wall next to the watercolor my youngest sister had done of Dory and Marlin of “Finding Nemo” (for Coryn when it was her favorite movie; she's since moved on to “Up!”) and an oil painting I did of Coryn as a baby.

Coryn climbed up on the back of what had been my hope chest (my brother used to call it a hopeless chest, but that's a whole other story) and touched the now dry paint almost reverently.

In the past I have attempted to display Coryn's artwork in more conventional ways (such as on the fridge) only to have her take them down to improve upon or just play with. I managed to save the Christmas tree magnets we made by sticking colored crepe paper onto triangular poster board. I love them so much that I keep them up all year round. I know we will be moving several more times over the next few years, and any of these precious items could be lost or destroyed, but that canvas of finger paint I am holding onto with all my might.