Of Books and Noodles 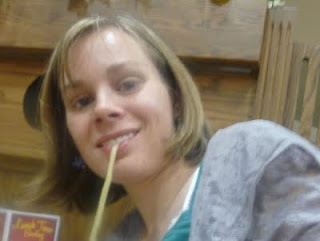 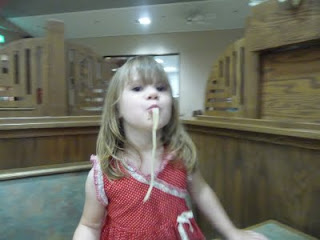 Today was a good day. It had some up and downs, but all and all, today was a good day. There was play group then a trip to the post office and a couple of hours spent in the park. She got filthy in the park, sticky and sweaty and just gross, so park flowed into a bath during what should've been dinner time but ended up being just "slight snacking" and play time.

I didn't want her to spend the evening watching TV or doing something messy which are the only two options for indoor play she consistently likes. Occasionally she plays well by herself with her little toys, but that's only after she gets up set with me for not being a good play mate. I didn't want her falling asleep way too early after her busy day. So I began to fish around for something to do. We could go out to dinner. Matt was gone so if we didn't it would probably be sandwiches or left overs or even frozen dinners for us. Cooking for one and a toddler . . .well, it just sucks. Still, I didn't feel like spending the money just to do something.

So we came up with a library trip. The library on base is open until 9pm on weekdays and is one of Coryn's favorite places on base. We usually go on gray afternoons or when our books are due, but today we just needed something to do. She's been pretty cute lately, sitting in the library chairs looking at books, so I decided to bring the camera. Before the night was over I'd taken 63 pictures (though 21 were deleted for being slightly blurred when I got home and put them on the laptop). . .oh and Coryn took two of those pictures, so I guess, I took 61 pictures. Coryn loves to use the camera.

On the way there we had a minor tragedy. We'd just passed the Crossroads and were about a block from the library when she informed me that she had to go potty. She really really had to go. So we started to walk faster, and faster, and faster. . .unfortunately at the door she gave out a cry of horror and shame and there was a huge embarrassing puddle at her feet. No one was around. Fortunately, she was wearing a dress, so we hurried into a first floor bathroom (the library is on the third floor and the first is offices which were all dark and locked up) where I decided to waste the undies. I had another pair in my purse and no ziplock bag to stick her wet ones in, so out they went. She calmed down and we went upstairs to the library none the wiser (though that puddle outside. . .well, I couldn't figure out anything to do but leave it). Somehow she had managed to keep her dress unsoiled.

At the library when she realized I had a camera she began to pose, and pose, and set up little scenes for me. She asked for me to take her picture sitting at the kiddy table. She asked for me to take her picture with the Cat and the Hat toy that sits on the library shelf, and she made a bed out of the cushions and pretended to sleep . . .and of course asked me to take a picture. We picked out a bunch of books. She sat in the chairs and looked at a picture book about rubber duckies. We had a lot of fun. By the time we finished up it was after 7:30.

A little bit hungry (and Coryn had already asked about Taco Bell a few times), so we went straight to the Crossroads and she got her chicken soft taco and I went to the Soba Express and got some Udon Noodles, just because I hadn't tried them yet and I've had just about everything else you can eat on base. They were okay, but they had rice crispies in them. . .yeah, the puffy cereal. I have no idea why. I guess this is somewhat normal in authentic Asian udon. A friend in Korea told me that's pretty common over there. Still, to me it was unexpected and I found myself picking around them. As they got mushier and mushier and bloated this became harder and harder. Fortunately I wasn't really all that hungry.

Coryn inhaled her taco and then wanted to try my food. This is pretty much SOP for Coryn. When she is hungry she can eat as much as any adult. Other times she lives on a glass of milk and a handful of raisins for 90% of the day. I figure as long as she eats until she's full, I'm not going to require consistency. She wanted to eat them with chopsticks but that didn't work out. . .but she really loved slurping them. She decided to lay them on the table, bend down, and slurp them straight off the table's surface. . .it's clean, right? She did this over and over again. I started taking pictures . . .and pictures. . .and pictures. Then she wanted me to slurp up a noodle so she could take a picture of me. We managed to eat up most of the noodles and we headed home.

It was a completely awesome evening. . .until we got home for the last hiccup.She tried to open our apartment door on her own and hit herself in the face with the door knob. The only thing that would make her happy again. She told me, "I'm not happy anymore!" while she bawled about her hurt face. "I need a blanket and a movie!" So my TV-free evening ended with twenty minutes of the Wonderpets dvd we'd gotten from the library. .. though we did follow up by reading all five books we got from there too. At least she was happy again. As we prayed good night she reminded me of all the fun things she had done. That makes it a pretty great day.