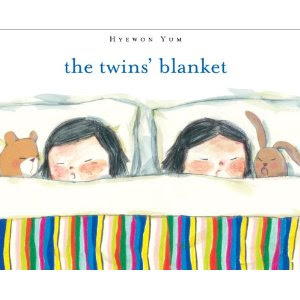 Coryn's favorite book from our last library trip is The Twins' Blanket by Hyewon Yum.
It's a sweet, short story about two "look alike twins" who share everything, including the same bed and special blanket. When their mom decides it is time for each to have her own bed, neither can decide who gets the blanket. Coryn likes to watch the little girls fight and make up thanks to their mother's creative solution.
Oh! And I finally finished the book I've been working on for the last three or four months: The Disappearing Spoon by Sam Kean. It took forever (mostly because I left it in the bedroom and read for five minutes every night which wasn't getting me through very quickly. .. I finally got Matt to take Coryn out of the house for an hour and I was able to finish off the last three or four chapters). It was an interesting read, though sometimes a bit technical (what did I expect of a book about the periodic table of elements. . .). I'm a big useless trivia fan plus it is interesting to hear more about the personalities behind the discoveries I learned about in high school. I thought I'd close with a quote from the book because I'd never known the second half to this conversation though just about everyone knows the first:
One, as he got older and crustier, Einstein came to distrust quantum mechanics. Its statistical and deeply probabilistic nature sounded too much like gambling to him, and it prompted him to object that "God does not play dice with the universe." He was wrong, and it's too bad that most people have never heard the rejoinder by Neils Bohr: "Einstein! Stop telling God what to do."
I think the author means Einstein had been wrong to doubt quantum mechanics rather than that God really is deciding things via a cosmic dice game, but I do like Bohr's clever retort.