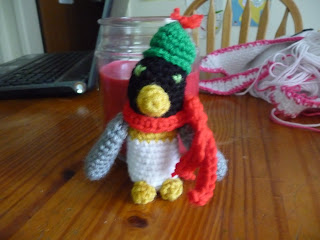 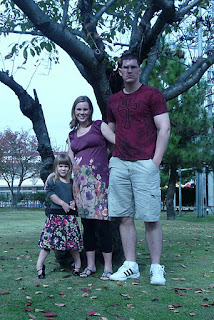 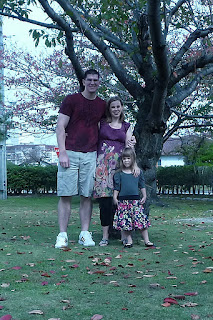 As I've mentioned earlier (or at least as I meant to mention earlier; I may never have gotten around to it. . .or just dreamed I mentioned it.) I don't like to start Christmas until after Thanksgiving. I'm trying to find exciting Thanksgiving preparations (though I recently found out my husband is going to be working on that particular holiday, thank you, Marine Corp. . .oh well, at least he'll be in the same country as me. It could be worse) and Coryn has been walking around saying, "Gobble, gobble, gobble," which is cute.
Living out here, though, there are certain things you just can't put off. Even though the Japanese people enjoy Christmas, they don't really have Christmas tree lots and the Christmas cards are expensive and in Japanese. So for all that stuff we're forced to buy on base (or online if it is something that can be shipped. This isn't an option for Christmas trees that I've found), and they never seem to stock enough of seasonal items, so it is best to buy sooner rather than later. Last year, for instance, I put off buying a Christmas tree because mine had been toasty dry by the time Christmas actually got here the year before. . .but two weeks before Christmas there were only a few needle-less twigs left in the Christmas tree lot on base (and they were still trying to sell them at full price) and so we ended up buying a small, fake tree (which solves that problem for this year). I also like to buy my Christmas cards for next year a few days after Christmas when theoretically they will be on sale, but two days after Christmas I looked all around and there wasn't a single card to be found. . .oh that reminds me, I need a copy of the Grinch . . . I can order those online, but I miss my after Christmas clearance option.
Christmas shopping is not something I save for after Thanksgiving. I'm normally completely finished with my shopping long before Black Friday and have all of Coryn's and Matt's gifts stashed away waiting for us to set out the tree so I can wrap and display them. I always end up back in the store for that one last gift or stocking stuffers, but it's easier to control my spending when I'm not caught up in the Christmas spirit. Plus my husband is ridiculously hard to shop for and it is sort of a year round process trying to find something he'll appreciate.
Anyway, I'm about to start on one of the projects I can't put off. This morning I dragged Matt outside and we took our family Christmas card picture. We're usually pretty casual, but for the last two years it has been the three of us sitting on a couch, and I wanted to take advantage of a nice day (possibly one of the last of the year) and get an out door photo. You'd think I was doing a fashion shoot or painting in oil on canvas for how much Matt whined about it, but we managed to get a couple of shots I liked using the timer on our camera . Now I have to order prints and to get the right amount of prints I need to know who I am sending a card to which means I need to make a Christmas card list.
Matt pointed out that anyone who really cares probably sees our pictures all the time on the facebook anyway, but it's a tradition I don't want to give up. For one thing I love mail and if I send I receive. . .some times. It is hard to know who I really want to send something to, and I hate it when I finally decide to cut someone who hasn't reciprocated a card for a few years in a row off my list. . . only to have that be the year they finally send me something. Anyway, as soon as I get off here, I'm going to buckle down, go through my address book, and make a list.
Other than that, I've been working on special orders for my crochet business and trying to decide what items to stock up on for the Craft Fair I'm doing in just under two weeks now. I need to make a decent amount of money to justify all the yarn I've bought over the last year. . . Take a look at my Christmas penguins!