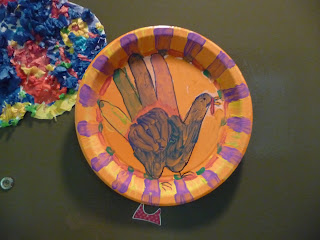 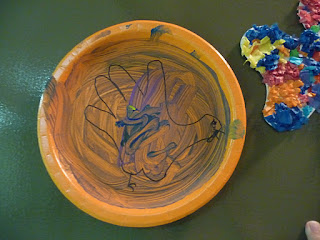 Coryn has been excited about the holidays since before Halloween. She is starting to remember things from year to year and the moment one holiday ends she is asking about the next. Sometimes I have to stop and think about what she means, like when she started asking just after Easter about going around our midrise to get candy (trick or treating). Other times she's pretty clear (she has been asking about her birthday consistently since her last birthday). Now we're onto the big block of Holidays. We got through Trick or Treating and the Christmas decorations are already flooding the stores.
I've noticed Thanksgiving is getting crowded out between the (I'm sure more profitable) Halloween and Christmas season. Halloween displays came down and were immediately replaced with Christmas displays . . . and Thanksgiving gets one small table in our local exchange with a couple of turkeys and some pumpkin scented candles. This may have something to do with being in Japan. None of the holidays listed are officially celebrated in Japan, but they've adapted Christmas quite well . . .and Halloween gets some attention because kids love dressing up and candy even if they don't quite understand why. Thanksgiving, though, is very very American. There really isn't anything to draw Japanese people to it. Still, the Exchange is here to serve American service members so you'd think they'd be aiming at that demographic. I'll have to see what it is like when we head back to the states (though I always remember there being a good deal of Thanksgiving decorations available even if they had to share some shelf space with Christmas stuff).
Anyway, so today I decided to combat this lack of Thanksgiving by letting Coryn watch the Charlie Brown Thanksgiving and then doing a simple craft. I asked her if she knew what turkeys were, to start things off.
"Turkeys are bad people?" she said, obviously unsure this was correct. I call her a turkey sometimes when she doesn't listen. I said no. "Turkeys are something to eat," she then decided. Technically, yeah, but I wanted her to know about real, live turkeys who gobble gobble gobble. So we google imaged them and then youtubed turkey calls. She thought listening to Turkeys was funny and we sat down and made several turkeys on paper plates, one of my hand and four of hers (three for the grandparents, one for our front door). She then asked to hear the turkey gobble gobble some more. . .afterwards she did laugh and say, "Cock a doodle doo" though, so I'm still not sure she totally gets it.