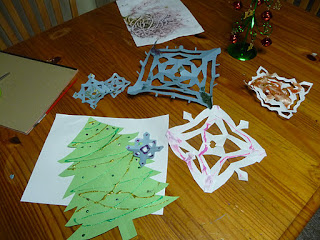 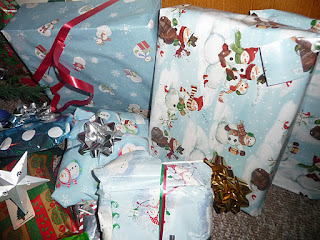 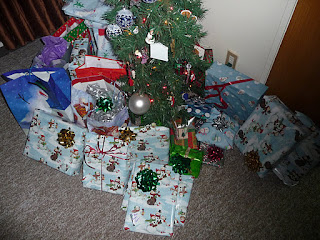 I actually like my paper to be mismatched. I think it looks bland when all the paper under the tree is the same pattern or color or what-not, so most years I pick out two contrasting papers. Last year it was silver with candy canes and green with holly leaves. This year, however, the exchange on base only seemed to have two pricing options, 69 cent paper and 6 dollar paper. Of course, being cheap, I was going to only buy the 69 cent variety (though I had to run the rolls under the price scanner to make sure what I was getting was 69 cents. . .as usual everything was mixed around and mislabeled or simply not priced) and of that there were only two prints that appealed to my particular aesthetics, both of which happened to be light blue with snowmen. Of course, they were different snowmen. One had cartoonish snowmen and the other more artfully drawn snowmen in hats and scarves playing musical instruments. Still, even if they were different snowmen on slightly different paper, they were still very similar. .. but oh well. I had enough paper left over from last year to wrap a few small presents and get some variety in there, and my family back home would be sending presents, normally already wrapped, so I bought the two snowmen rolls and headed home.

Then my grandmother sent packages. . .wrapped in, again, slightly different snowman themed paper (hers was on a slightly darker blue background). . .followed by my mother (her snowmen were elongated and accompanied by green pine trees. . .on a light blue background.), so in spite of my eclectic desires I have the world's most one note set of wrapped presents. Yeah, there are a few contrasting gift bags and the smaller packages I managed to wrap in the green holly leaves and the silver candy canes, but all and all, this year, my gifts have been overwhelmed by snowmen.

It's probably because my family knows I like blue and there are only so many Christmassy designs that look good against blue (Were snowflakes too much to ask this year, wrapping paper designers?). I'm pretty much done wrapping (I like seeing my presents under the tree), so I guess I'm stuck with snowmen for now, but next year, I think I'm going to make my own wrapping paper just to have something unique.

Also tonight I tried to get Coryn involved with making and decorating paper snowflakes, something I've always loved doing. She's too little to cut out snowflakes, but I'd bought her some glitter glue to decorate them. It went well at first, but like she does in many things, she got carried away with the glue and was gobbing it all over and soon just smearing it around on a piece of paper. We had a decent time of it, though, before it just got way too messy.
Labels: apartment Christmas crafts cute daughter family gift gift wrapping Holiday homemaking