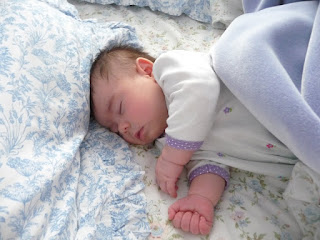 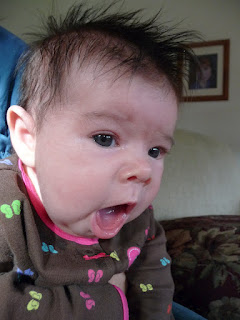 So where to start about baby Claire. . .

Claire is the most expressive baby I've ever met, mostly for better but sometimes (like late at night when inconsolable and tired) for worse. Her coos are already conversational and if you get down to eye level with her, her eyes widen, her whole body shakes, and her mouth works every which way as she tries with all her might to communicate.

I'm not exactly sure when she first smiled. Within the first week I thought I caught a glimpse of a grin but dismissed it as too early . . .but it kept happening, so after awhile I had to admit that she was smiling. Once I walked in on her laughing, not audibly but definitely visibly, and as mentioned if she is unhappy (usually because she is exhausted and not a good self-soother) she will wail and weep like a melodramatic banshee.

Oh and her eyes, born wide open and baby blue; from the beginning she was looking at everything, especially people. Her hair has been the envy of everyone she's ever met, dark, abundant, and feather soft. She has a Tintin style cowlick and some fuzz on her lower back for good measure. Her nose is slightly more turned up than Coryn's and her face a little rounder, but other than that her baby pictures are about identical to her older sister's. Her temperament, not so much. Coryn was a calmer, sleepier, and generally less fussy baby.

I wouldn't got as far as calling Claire "colicky," but if she gets herself upset she screams until she is sweaty and hoarse.

Claire took full advantage of having her daddy around from the start, a privilege Coryn missed out on due to Matt being deployed until she was about the age Claire is now (2 months and some weeks). It took a couple of days (my squeamish husband didn't want to hold her, even swaddled, until she'd been completely bathed), but Claire wrapped him around her tiny fingers and turned my big, tough Marine into a 6'5'' baby whisperer. She would calm down for him during the middle of her fussiest fits. He is now in Florida while we are in Oregon (hopefully just for a few more weeks, then we'll join him) and I really miss him during Claire's meltdowns.

I'm sure Claire will provide me with plenty more stories. I could brag forever about random strangers approaching me to tell me how beautiful my baby is or how amazing her hair is. . .It's pretty dang amazing. Like Shawn Spencer amazing. (I try to provide links when I make a reference like that. . .click on them if you are confused.) For now, though, I will leave you with a couple of cute baby photos.
Labels: amazing hair baby cute mom new baby parenting Psych Shawn Spencer Tintin