Matt and I are both Geeks but we approach Geekdom very differently. We both love our Sci-Fi but I'm into campy, cheesy stuff (I am into Star Trek; him not so much). He's into stuff with explosions. Our tastes collide frequently, however, and we watch a lot of TV together. I have recently given up World of Warcraft, but I stay on top of gaming terms and new content and generally watch him at least out of the corner of my eye when he's raiding.

One thing we enjoy together is the new TV show Grimm. Grimm is a combination of fantasy/horror and crime procedural. The concept is that fairy tale creatures are alive and well (and a lot of them living in Portland, Oregon, which as a former eastern Oregonian doesn't surprise me that much. Portland is sort of the weird hippy cousin to the more down to earth locales of the eastern side of the state, and I'm willing to believe that the big bad wolf lives there fixing clocks and drinking Merlot) but only special people, descendants of the original Grimms who wrote the fairy tales, can see them for what they really are. They use this power to keep the fairy tale creatures (called Wessen, said Vessen) in line and are generally kicking butt and taking names. 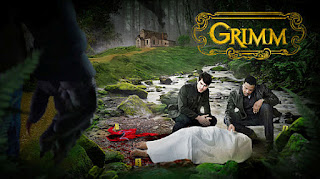 Into this mix we throw Nick, a Portland city police detective, who suddenly starts seeing things he can't explain. Before Nick can have himself committed, a death bed confession from the aunt who raised him informs him that he is a Grimm and now people will be coming after him because of it and he should leave his girl friend and prepare for a long, lonely, monster hunting life. He befriends a big bad wolf who isn't quite so bad after all but hides who/what he is from everyone else and uses his powers for good, solving crimes that other cops can't solve because they can't see the Wessen for the trees (that doesn't even make sense, but I like how it sounds, so I'm keeping it).

A few things about this show:
A. He doesn't leave his girlfriend, but she's really bland and I often wonder exactly what she brings to the table. Matt and I are actively routing for her to leave the show, hopefully through death (the character, obviously, not the actress, the actress can live a long, happy, productive life, just not on Grimm) so that she doesn't get to come back ever.
B. It seriously takes Nick forever to develop any type of viable staying alive skill. He mostly survives with the element of surprise as his only weapon.  . . and dumb luck and the before mentioned wolf friend. . .for over half of the first season. Recently he's learned some kung fu or whatever and that's making him a little less wimpy, but he still seems to be surprised every time some Wessen shows up.
C. Normal people in Portland don't commit crimes. Only Wessen commit crimes. Normal people are just clueless victims.
D. The big bad wolf (named Monroe) is the best character on the show and he deserves more screen time than Nick.

Anyway, Matt and I were watching the season finale last night. Evil witch had come after Juliet (bland girlfriend) and we were hoping we would finally get rid of her. Usually competent and tough as nails police captain guy (who is one of the few characters who knows about Nick even though Nick does not know that he knows) somehow manages to get cornered and captured by a Wessen assassin (who killed Nick's parents, prepare to die!) and is tied to the chair in his condo when comic relief and fall guy Sgt Wu comes to the door to check on him. I expected Wu to get his butt kicked at this point and said,

"Oh, poor Wu," because he's one of those characters that is always getting knocked out or poisoned or whatever. Then Wu moves aside a little and you realize he's not alone: there is an unnamed officer next to him. Wu says something about getting a key and walks away and Matt and I said, simultaneously, "Oh, no, poor redshirt!" 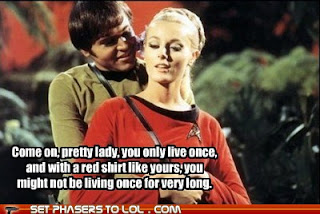 It's moments like that that I really realize I married the right guy. I mean, finishing each other's sentences is one thing. Finishing each other's sentences using a Star Trek term while discussing a show about crime fighting big bad wolves . . . that is just completely awesome. I kind of got carried away with it and babbled on for at least a half hour about my predictions for where the show is going, or how I would write it if I were the writer (Juliet is in the hospital because the witch came after her and I think whatever the witch did will turn Juliet evil and she will come after Nick and Nick's mom, who, spoiler alert, turned up alive at the end of the episode, gasp!, will have to kill her to protect Nick which will make Nick a much darker, more determined evil-fighter for at least half a season before they predictably find him a Wessen love interest. . .though they haven't introduced a creature that I really can see the producers letting the lead make out with. . .Matt says Nick isn't a strong enough dude to be dark for more than half an episode, though, but Matt is like a Sith Lord and his idea of dark and my idea of dark are night and day. . .which means I guess my idea of dark is light. . .huh. . .)