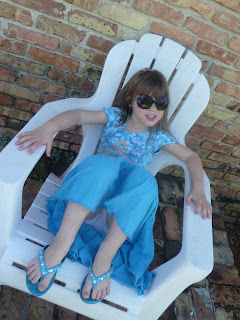 I've felt a little bit like that since I arrived in Florida. About mid day I get fuzzy headed and tired feeling and it's pretty obvious, it's just the heat getting too me. Coryn has always run a little hot. She is the first kid at the play ground to toss aside her coat, even in winter, and generally after an hour of play her bangs are pasted to her forehead with sweat. Here it is even worse, especially in the weeks before our household shipment got here. We'd come from a fairly cold climate in Japan and gone to an even colder Oregon for several weeks before finally arriving in the sunshine state. Consequently, most of what I packed (for Coryn and myself) consisted of clothes that were too thick for Florida. There were too many long sleeved shirts and jeans and tights, not enough t-shirts and no shorts.

Fortunately, Coryn is pretty good about staying hydrated. Usually she'll knock on the door (why she thinks she needs to knock on her own door, I don't know) at least once an hour asking for water, and even if she doesn't, she's trained me to the point where I'll come out and ask her if she needs it.

Me, sometimes it is harder. I like my water ice cold. I grew up having a well and I'm picky about the way water tastes. I really don't like most city water. Pensacola's water is actually decent (better than San Diego anyway), but it still isn't my favorite beverage. I generally have several cups of tea a day, at least one coffee made with my beloved espresso machine (a present from Matt the Christmas before last), and towards the evening I'll generally grab a diet soda of some sort. I have weened myself off of fancy drinks at dinner and now even at restaurants, there is a good chance I'll just say, "I'm fine with water," if the server asks me if I want a drink. Still, I know I'm not getting my eight glasses a day or whatever.

Today I got a lot of stuff done this morning. Now I don't feel like doing anything and it is only 1pm. I mean, I have a meal in the crockpot for tonight. I finished the laundry. I swept the kitchen. . .other places need swept, but there are still a lot of boxes to unpack in the way and a lot of this stuff is too heavy for me to move on my own. I really want to do something relaxing. I'm just not sure what yet. . .and honestly, I shouldn't let Claire nap for too long. This nap is supposed to be her short nap. . .oh well, I had better get going.
Labels: drinking Florida health heat ramble water