You all know, if you've read my blog or follow me on Facebook and/or Pinterest, that I love to crochet. It's really addicting. I also like watching you tube videos and have been impressed by how relaxing even amateur instruction videos can be to watch. I'd been thinking for sometime about how to make my own video and so today I made this practice run.  Right now it is unlisted because I don't feel it is smooth enough for public consumption. I'm just looking for some constructive criticism, maybe even some technical advice about good (free) programs that are easy for beginning video editors to use. I would like to create a series of crochet videos. If you want to take a look at my youtube video, let me know what you think in the comments. I'd appreciate it.

In other crochet news, last night, after getting frustrated with a pattern for a toy dragon, I decided I would make something all of my own and what came to mind (for whatever reason) was a mermaid. So I sat down and in about an hour had a mermaid of my own, fins and all. She's a pretty simple pattern which I will eventually write down. I still have to figure out her hair. I like how it looks but I'm afraid that it isn't attached as firmly as it should be. If she were subjected to a rough play time I'm pretty sure she'd go bald. 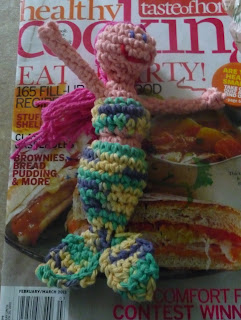 Here she is. I told Coryn her name was Lufinda and Coryn said, "No! We have to name her after the princess who lives under the sea!" So yeah, she's named Ariel now. Oh well. 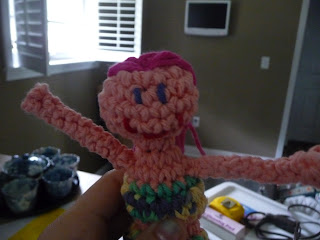 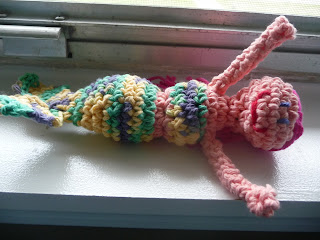 I'm pretty sure the pattern would be Beginner to Easy with the exception of maybe her fins which aren't that hard, but it's hard to explain how to make them so I might need to practice my pattern writing a bit.

I've also become addicted with this flower pattern. It's the one I describe in my video. These are barrettes made with the pattern. I bought barrette clips at Wal-Mart and have made six of them so far. 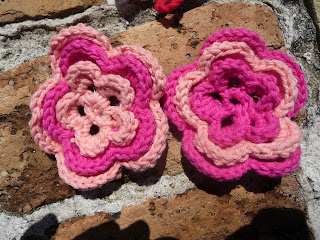