Claire is one of those babies that stare a lot. From very young, if there was a bright pattern on something or it moved or it had a face, she was drilling into it with her eyes, studying it. Because of that, I knew she would be the sort of baby who would love a good mobile.

I also found out that, for what they are, mobiles can be pretty expensive. The ones I liked, that didn't look cheesy or cheap, ran around $40.00 which to me seemed like a lot. So after a few attempts at making my own that flopped, I found these wooden butterfly while poking around the craft supplies at Wal-Mart. These plywood butterflies were (if I remember correctly) about $2 a piece. I already had hooks, string, and tempura paint left over from another project, so the whole mobile ran about $6.
Coryn helped out with the painting, but she's a very deliberate painter (which is nice in that she takes time with stuff but not so nice because she'll finish something and decide she wants to start over and paint over everything she did the first time, over and over and over again), so she only did one butterfly completely on her own and the rest I finished after she'd lost interest. 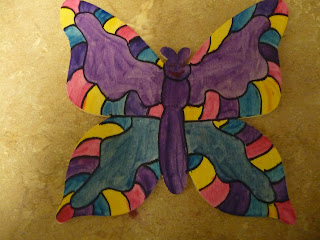 For my butterflies, I drew a design with a black sharpie and then colored in with the paint. Coryn initially didn't want to do hers this way, but when she saw how mine turned out she asked me to go over hers with the marker so it ended up with a drawing over the paint (either way works, but if you don't wait for the paint to dry before marking over, the paint can ruin your marker). 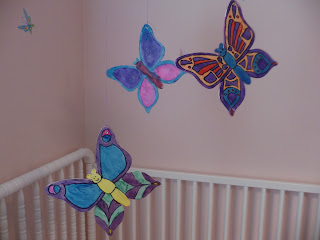 Matt drilled a hole (I could've done it myself, but I didn't know where he kept the drill; our garage isn't organized yet) and  screwed the hooks (the same ones I used in my stuffed animal holder) into the ceiling and I hung the butterflies up. 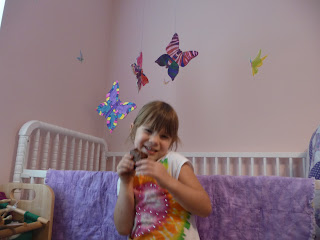 Coryn wanted in the picture. 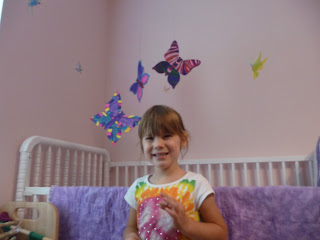 Another picture but without the brownie she was clutching so tightly in the first photo.


I've tried it out on Claire a few times; she's still not sleeping in this crib because the crib is in her sister's room and I'm keeping her in our room for a little bit longer. She likes the mobile. The cord I used is stretchy so if you pull one of the butterflies down a little bit it will "bounce" and keep moving for awhile. A motorized mobile might be better, but I'm not that handy and this one keeps Claire's attention just fine.
Labels: baby butterfly craft decoration diy mobile thrifty