I'm typative today. Typative is my new word. It means I am talkative-in-a-typing way. . .and rather than bombard my friends with constant Facebook status changes, I'm taking it out on my blog (and sharing the links, of course).
I saw this list today on Pinterest: 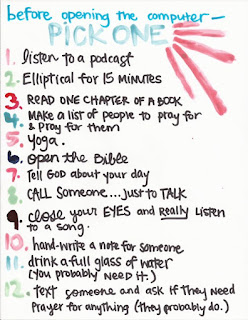 and traced the link back to this http://mango-watermelon-love.tumblr.com/. I hope I'm giving credit to the correct source. I'm considering that my lazy version of due diligence. I decided to put it as my computer background as a reminder to not waste so much time on the computer, but it didn't do any good because here I am again. . .in fact, I'm blogging about it on the computer which might very well be ironic. It's (if you are confused in anyway) a list of productive things to do before you sit down at the computer. . .I found a loop hole, however, because it says "pick one" and number 11 is "Drink a glass of water." Which takes me about 30 seconds and I can do it en route to the computer. . .I'm going to be well hydrated.

In case you were wondering, I do have a reason for this post and here it is! 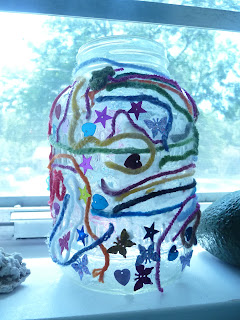 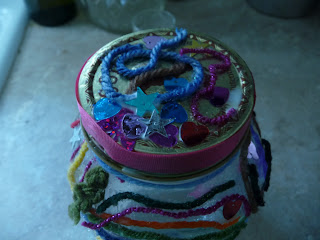 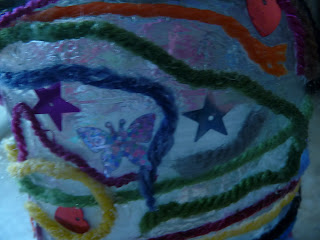 What is it, you may very well ask, and I'll tell you. It's the best craft ever! I'm not making that up. Coryn said it was and she's an expert on these things. Here, have a closer look:

Coryn and I made this with a pair of beat up paintbrushes (the kind on their last leg that you don't mind gumming up with glue), a bunch of yarn scraps (I can't throw anything away), a glass spaghetti sauce jar (again, nothing is getting thrown away here), some sparkly confetti (not part of the original plan, but it added to the awesomeness), and mod podge (that stuff just might be my new favorite thing).

I'm pretty sure you clever folks can figure it out from there. . .Coryn and I spent about an hour painting glue onto the jar (which I'd previously scrubbed most of the label off of) and then sticking on various pieces of yarn and confetti. In the end I also glued a ribbon around the edge of the jar lid, but depending on the jar you use, this might not be necessary (mine had some printing there about the brand name of the sauce I wanted to cover up). I'm not completely sure what we are going to do with our jar, but the possibilities are endless. Maybe we'll put some bath salts in it as a present to Grandma. That was my original thought, anyway, but Coryn is rather in love with the jar and at least for now wants to keep it.
PS I just googled typative, and it is actually a word according to the Urban Dictionary, so I guess I can't claim I invented it, but I can feel better about using it.