I have a major soft spot for that cat food commercial where the man proposes to his girlfriend with a kitten. I honestly don't remember what brand of cat food it's trying to sell but it's sooooo cute. Also, if you think about it, if she says no, she's got her first cat to begin her crazy cat lady spinster hood.

Yesterday, Matt, who has recently fulfilled his life long dream of having a German Shepherd, went to get his puppy some food and treats at the Petco across town while Coryn and I made our weekly commissary run. When we got back, Matt opened the door and perched on his shoulder, like a wizard's familiar, was a tiny kitten. I think I squealed. It was love at first sight. My first instinct was to name the scrawny, big eyed little guy "Smeagol" but I felt it was a little too cliche plus with Coryn, Claire, and a puppy named Caen I wanted to keep the C thing going.

He's lanky and I want him to grow up to be a stately fellow so I ended up naming him "Carlton" after Carlton Lassiter, the Head Detective of the Santa Barbara PD (on the TV show Psych).

Coryn and I are in love with Carlton, and he's an affectionate little guy. I didn't realize how old he was, I had guessed maybe 8 or 10 weeks, but he's actually 12 weeks old, just incredibly tiny. Apparently he was part of a feral litter that the local humane society had rescued. However, Carlton's favorite person is Claire. He falls asleep next to her. He climbs into her play pen. He's an amazing kitten. 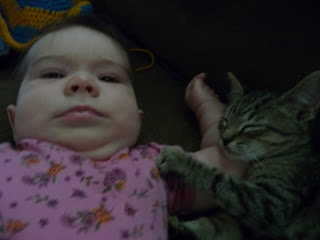 Here he is with Claire. 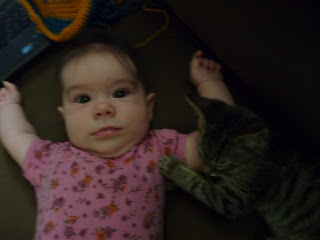 They love each other.