Every so often I take a break from blogging and go back to fiction. I've shared some of my short stories on here. You can find four of them in the following links:
Claire and the Giraffe
My Cat's Dream
Sally and Daisy
Specific Snake . 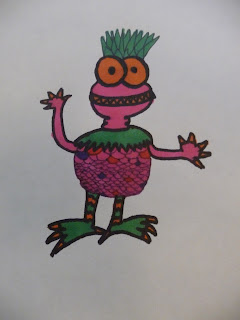 Today I scratched out a new one, a rhyming story, based on something I told Coryn when she decided to try and keep me in the room a little longer at bed time by pretending she saw a monster (the fact that she couldn't stop grinning made me skeptical.). I wish I had the talent to illustrate this. I read once that most publishers prefer you to submit the book without illustrations anyway, but most of these aren't good enough for commercial publishing anyway, and I'd just like to make my own little booklets so I could read them to Coryn who still likes her books to have pictures. I tried to make a little monster to go along with this blog post, but while I like him, he isn't what I had in mind exactly. He's a little too Muppet like.

Anyway, without further ado, I present, The Monster Zoo.


Sally said, "Mama, don't turn out the light!
I'm sure there's a monster in my room tonight.
He's under my bed; I can hear him snore.
I saw his claw marks across my floor!"

Mama got down and looked under the bed.
"You're right; I can see him," was what she said.
"He's got googly eyes, fangs sharp as nails,
Spiky green hair, and slimy pink scales."

Then Mama said, "There's just one thing to do.
We'll have him hauled off to the Monster Zoo."
"The Monster zoo?" Sally said with a blink.
She'd never heard of the place, didn't know what to think.

"Oh yes," said Mama as she dialed the number.
"They'll collect this monster, get you back to your slumber."
In less than a minute, well, perhaps three or four,
Two men in jumpsuits came knocking on the door.

One was tall, the other petite.
They both wore caps and had boots on their feet.
They carried some nets and a huge duffle bag.
"What sort of monster are we here to snag?"

"Is it a blue one with glowing green eyes?
A fat one? A thin one? I love a surprise!"
"Did it bite you or pinch you? What did it do?
Whatever, no problem, we're from the Monster Zoo."

"We'll lure him out, snatch him up, take him away.
Then off to our zoo, and that's where he'll stay!"
Sally just stared at these men and their nets.
They were dealing with monsters; these things are not pets.

They crawled under the bed; she heard a great thumping:
A ruckus, a racket, a terrible bumping!
Then all was quiet. What was going on in there?
Had they captured the monster or had he eaten the pair?

Then out popped the men with a victorious hoot.
"We caught him! We snagged him! We got the big brute!"
The monster hung in the net like a pig in a poke.
Up close and corralled he was a sorry old bloke.

His eyes were sad; he teared up just a bit,
And Sally was sorry she'd pitched such a fit.
"Don't hurt him," she begged. "He's really not bad.
Don't take him away if he's going to be sad."

"Don't worry!" they laughed. "Because it is true:
The best place for monsters is in our Monster Zoo!
He'll have friends to play with and all he can eat.
He'll live between the Loch Ness and a bunch of Big Feet.

"Our zoo is quite large. He'll have room to spare,
Much more than under your bed (it's cramped under there.).
So say good-bye monster; we're off to the zoo.
And there you'll be happy, that's my promise to you."

And with that they were gone, off into the night.
Mama tucked Sally in and turned off the light.
Sally lay down and counted her sheep.
She only got to five and then fell asleep.
Labels: kid friendly monster monster under the bed poem rhyme story