One word that I never have and most likely never will be associated with is "finesse." Personally, I'm fine with that. I like to do things quickly. I like things that look hand made. I like off kilter, unusual, quirky. Because of that, I don't do a lot of complicated crafts. In fact, this "craft" is so easy it scarcely deserves the word. It doesn't even qualify as a "project."

I usually buy the biggest size of things like liquid soap and then refill smaller bottles so that I can use them easily. Because of this, the soap inside my soap dispenser usually doesn't match the label on the outside of it. Today, while doing the refill, I noticed that the label actually pealed off effortlessly without leaving any residue. . .so I gave one to my daughter and one to myself and we spent fifteen minutes covering the bottles with stickers. I like how they turned out, even though Coryn's looks like a four-year-old did it and mine doesn't honestly look much better. 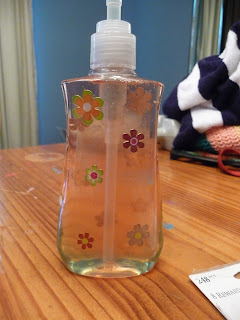 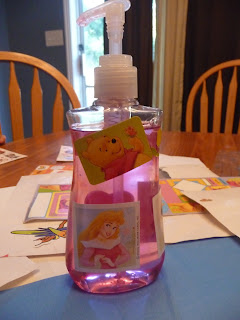 Admittedly, this isn't for everyone. I can't see either my mother or my sister having Disney Princess Stickered bathroom accessories. . . but I'm not that picky. In fact, my lap top has been decked out in stickers too, sort of looks like a middle-schooler's notebook (the paper kind, not the electronic).