What happened this morning


Some mornings I go to pull up facebook for the first time and already have like four competing status updates on totally unrelated topics in my head. At this point I can either post four updates in rapid fire style, awkwardly try to combine them into a single update, just totally not post them (but, heck, I'm in an over sharing mood. That's not an option), or make a blog post out of it. 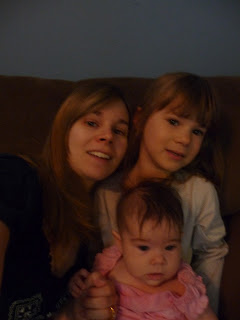 So this morning Claire woke up at 6am which is the new 7am, apparently. She used to get up at 7. I could handle that. 6 is a litte bit rougher. Considering my ten o'clock bedtime, how long it takes me to get to sleep, and how often I wake up at night, 8 hours isn't happening that way. I can live on this amount of sleep but I'm a zombie for the first hour or so, a zombie who is trying to sneak back to bed in any way possible.

I really don't understand the whole zombie thing. My husband seems to be into it because you can kill zombies all over the place without guilt. My brother-in-law thinks it is some sort of metaphor for destroying the mindless hordes that make up society. To me, it's one of the more stupid aspects of popculture. That's just a little aside.

This is grocery day. I made a to go coffee to take to the store with me. It's almost gone already. . . huh. . .I guess I'll have to make another. When I get a plastic, lidded cup from a fast food establishment I save it, wash it, and use it for to go coffees.


Ugh, Claire just pooed. She's still on the liquid diet so her diapers have a sour milk smell, not really offensive, but it's distinctive.

Okay, back from the diaper changing. . .where was I . . .status updates. . . oh, the dog ate my glassess this morning.

As I mentioned, Claire woke up at six but by eight she was ready for a nap and so was I. I got Coryn (who had only recently gotten out of bed) breakfast and told her she could pick any movie to watch as long as it had a "fastplay" option because I haven't been able to find the remote since Thursday when Coryn kept pausing Tangled over and over again so her house guests could run up and down the stairs screaming that the dog was jumping on them every few minutes and a lot of dvds won't let you start them without a remote to push "play movie" on the option menu. She settled on "Aristocats," and I lay down next to her so we could share some quality time (ie she could supervise me dozing). The dog came and licked me in the face several times, but I was too out of it to do more than flick him away.

I don't wear glasses often. They are solely for early mornings and late nights. Otherwise I'm all about the contact lenses, but as mentioned, I really wasn't ready to "face the day" yet, so I decided to steal a half hour or so. . . I can't even remember if I took them off. He's a clever enough dog that he may have taken them right off my face, but however it happened, Coryn blurted out, "Mommy! The dog is eating your sunglasses!" For a moment I considered letting him finish the cheap pair of sunglasses I found the other day which is what I thought she meant, but Coryn doesn't know the difference between seeing-glasses and sun-glasses, so I opened my eyes and found that he was chewing on my prescription lenses. They are pretty scratched up. Not a cheap fix. Thankfully, I don't wear them much.

Not a lot, really. Matt has duty tonight so I'll be on my own. I'm going to finish the hat I'm making for myself (I want one of those floppy beach hats like I made for Claire, just in my size. I might post the dimensions, but the pattern is basically the same). More later I'm sure.
Labels: dog family glasses mom pet schedule