My daughter loves a specific episode of the Backyardigans called Breakout where the two girls play princesses who have to escape from a tower using action hero skills including a trip through a "hall of lasers" where they have to do a special dance to avoid touching a laser and setting off an alarm.

It's an action movie staple. One of my favorite takes on it was on my all time favorite TV show Psych  where Shawn tries to talk Gus through a similar laser grid saying, "It's just like Entrapment. Dude, you are way more limber than C. Zeta Jones."


Coryn has a great imagination on her own, even without inspiration like this (last night she told me after a reading of The Cat in the Hat, "Mommy, I wish this book were magic and I could jump into it," for instance), and yesterday evening she found some "t-shirt yarn" I had made out of a shirt she'd ruined.

"Mommy, what is this for?" she asked. I didn't really have any plans for it. I had just tried to make it as an experiment and there wasn't really enough to do anything with, so I told her she could have it. The next thing I knew, there was a string of it going from the door knob to her sister's bouncy saucer to the back of my chair and she was jumping over and climbing under it over and over again. To say I was impressed would be a major understatement. This was awesome. . .

So the next day I told her to wait on the couch until I was done prepping a "surprise." She sat down stairs yelling up guesses.

"Is it a party? Is it something to color?" 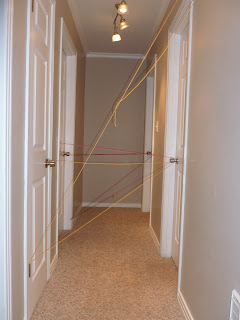 The laser grid before I made some necessary additions. 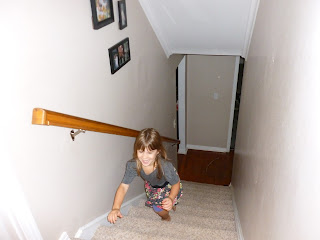 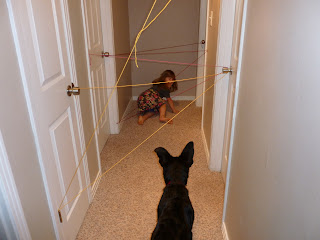 Her first trip through. 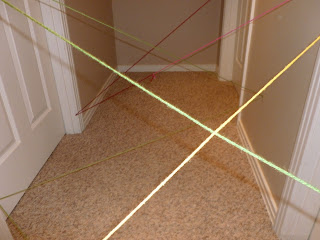 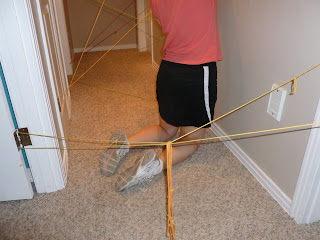 Coryn photographs me adding on to the laser grid. 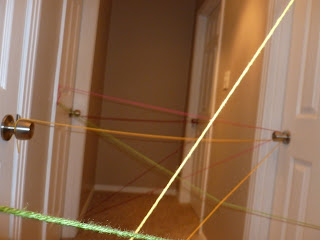 
I took my scrap yarn and some scotch tape and about five minutes later (and after telling her if she came up and peaked the surprise would "disappear.") the laser grid was set up. I ended up having to add on over the next half hour or so because the first version was simply too easy but eventually we found  a way to perfect it and it was just plain awesome. Eventually it had to come down because I had to vacuum in that area and it was making it so we couldn't open any of the doors in the hall way, but for the amount of time it took to set up, I'd recommend this for a rainy day activity for anyone.
Labels: action adventure imagination kids laser grid parenting rainy day activity rainy day fun