I've been feeling a little stressed for no particular reason this week. A lot has been going on. For instance. . .

I don't know why I'm so stressed. It doesn't hit me until the afternoon. About the same time as I have to make dinner I just have no patience. It's not like me.

Coryn was supposed to have her first gymnastics class this week but after a half hour drive across town, we found out that the instructor had had a death in the family and canceled class. She'd tried to get a hold of people, according to the guy at the community center, but hadn't been able to contact everyone. I guess you can't be mad when someone is dealing with a personal tragedy like that, but Coryn was pretty disappointed.

Anyway, here is a dose of cute.
I've also made this monkey hat: 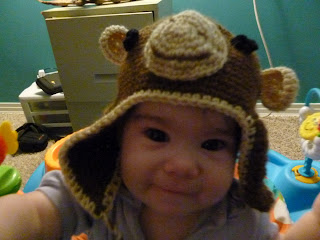