The other day (the same day as my Gymboree meltdown) Coryn and I were browsing at World Market and Coryn brought me a hat she had found on one of the racks. I'm assuming it is a discontinued item because I couldn't find it on their website, but she thought it was pretty and I thought, "I could make that. It's a basic crochet v-stitch cap." So over the next few days I made a hat that looked a good deal if not exactly like the one for sale at World Market, only of course by the time I finished, Coryn had lost interest. The hat pattern needs a little more work before I share it, but I did invent two different flower motifs because I wanted a daisy to embellish the hat and I thought I'd share those with you now.

Daisy Accent Number One:
Starting in yellow
R1-Ch2, 6sc in the second ch from the hook
R2-2sc in each st around, 12 total, sl st in the first stitch of the next row, change to white yarn.
Here is a picture of it at this point. 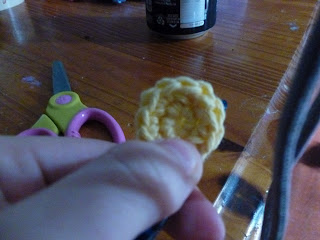 R3-ch5, skip a stitch, slip stitch into the next stitch, around as seen below. 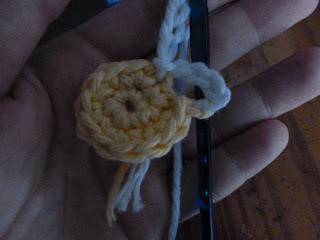 At the end of the third row you should have six petal loops. 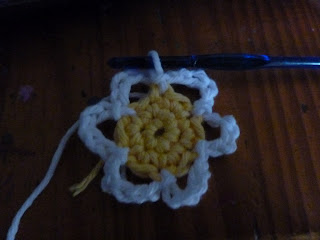 R4-inside of each petal loop stitch the following, sc, hdc, dcx3,hdc, sc, around. 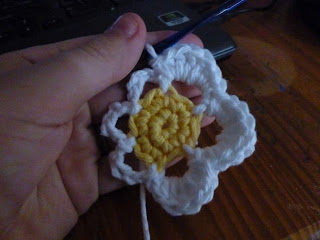 This is the flower halfway through row four. 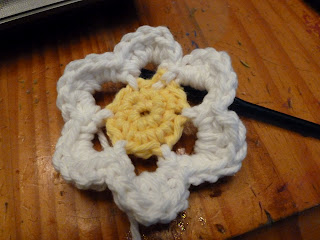 At the end of row four, slip stitch somewhere behind the first petal (to make your fasten off point invisible) and fasten off leaving enough yarn to stitch it onto your project. 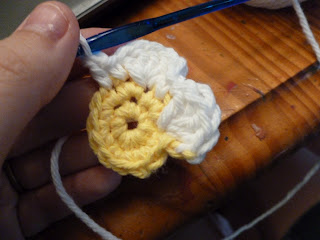 Here is the completed flower. 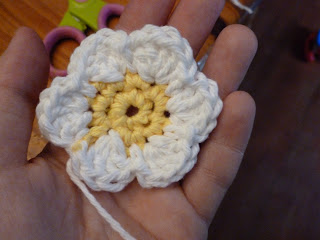 A quick side by side comparison. 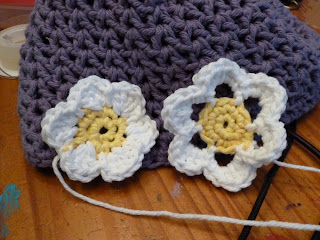 I think I'm putting daisy number one on my hat. Which do you like the best?