I've blogged a little bit about my concerns with formal/traditional education in an earlier post and it is something I feel passionate about (I recently learned that it really isn't a big deal to end sentences with prepositions and I feel so freeeeeeeeeeeeeeeeeeeeeeeeeee!!!!!!!!), but I still haven't made any decisions, but I do have a plan to see how far ahead I can get Coryn before it is time to make a decision.

I have a lot of educational ideas and am always pinning new ones that I find. I had been pinning them onto my Momness pinboard where I put all activities for kids, but it's getting too big, so I'm now taking out the ones that are school related and placing them on my new board: Firestarters: Kindling for Education.

I'm also just trying to incorporate learning in a very organic way throughout our days. I'll point out letters and sound out words phonetically during story time. We sound out words together. Sometimes we even pull out Teach Your Child to Read in a 100 Easy Lessons, which I like even if I find the method in it a little bit stifling (They want you to use the exact wording in the book and I know they have their reasons, but I'm a rebel at heart, and it is hard for me to just play along.). We also use Bob Books which are a reasonably priced set of easy readers (their main drawback is they are very easy for Coryn to memorize and I know she's often reciting rather than reading) and a set of readers from Usborne that have a page of text for the child and a page of text for you so that you can read together (find those here).

Learning to read doesn't involve a lot of fancy equipment and curriculum. I've been amazed at how much Coryn has picked up just from the little games we've played. Yesterday I cut out scraps of paper and wrote simple words on them then drew a picture representing each word onto a square of cardboard and taped the scraps with the words over the pictures. I told Coryn that she could lift up the paper and see the picture when she had read the word. I didn't need to offer any incentive other than her own curiosity, and while at first she was just throwing out wild guesses, I just kept saying, "No, sound it out, what does this letter say?" and she always got it eventually. She then was overjoyed to pull up the paper and find out she was right.

Today I ripped off the papers with the words, shuffled them up, and asked if she could match the words with the pictures. She did this in about two minutes.  Then she invented her own game where she tried to copy the words onto her own scraps of paper so she even got some writing practice out of it. 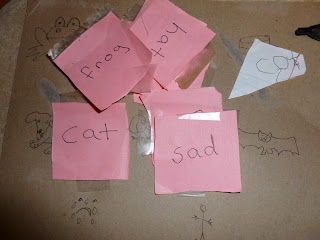 Coryn likes math better than reading so sometimes I'll just draw out some math problems, usually illustrated by pictures, and let her go at it. She's pretty good at adding as long as we're dealing with small numbers.

We practice critical thinking and general knowledge by playing trivia in the kitchen. I started doing this the other day and was surprised at some of the things she knew that I couldn't remember teaching her. I'm going to credit television because when I gave her multiple choice questions about which animal was an amphibean or a reptile or a mammal she got the right answer every time even though I'm sure I never got into classifications with her. We also did questions like, "Which is bigger, the toaster, the  microwave, or the refrigerator?" that involved thinking more than memorization. I rewarded her simply by drawing a star on a piece of paper every time she got the right answer and she wanted to keep playing it long after I'd run out of good ideas for questions (so you might want to prep ahead rather than just make it up as you go along like I was doing).

Sorting games are a great rainy day activity with educational benefits, especially if you are sorting by color (as in beads) or value (as in coins) or size (I actually don't have an example of this off the top of my head.  . . rocks?) . Coryn loves to sort money.

I'm not giving up on my ideas about organic learning verses artificial/classroom learning. I really think, for the lower grades at least, that this is the way to go. I'm going to keep experimenting and practicing with it, but so far, teaching Coryn is a lot of fun.
Labels: early education education homeschooling math organic pre school reading sorting unschooling writing