A couple of months ago I shared a video of my kitten, Carlton, consuming potato chips. Since that post, I've noticed that both of our pets (Carlton and Caen, our German Shepherd) seem to think they are entitled to people food. Carlton, being the more agile animal, is brazen about it, hopping onto the counters when I am cooking, my lap when I am snacking, and the dinner table whenever we are enjoying a meal. Caen, who Matt is training to stay out of the dining room while we are eating, is my constant cooking buddy since he knows that I am picky about trimming fat off of meat before I cook it.

He'll sit at my feet and wait for me to toss him chicken fat or a pork chop bone. . .and it doesn't matter if I'm not working on meat. He begs and even barks until I give him something, even if it is only the stub end of a carrot I'm grating for a salad. The other night I tossed him the green tops to strawberries and had him devour them. I had been composting, but now, I mostly just give everything to Caen.

Tonight I was making dinner in steps. I cut up potatoes, tossed them in oil and seasonings, and spread them onto a cookie sheet. The way I make potatoes (and basically the only way I will eat potatoes, otherwise I don't care for the texture) is to roast them under high heat twenty minutes on each side which requires me to take them (blazing hot) out of the oven half way through the process and flip them over. The blast of heat when I did take them out of the oven almost singed my face, but that didn't deter Caen who was sticking his nose inside of the oven. I nudged him out of the way and started to rotate the potatoes. One  closer to the edge of the pan slipped off and onto the floor. Caen dove. Tasted. Dropped it (because it had just come out of a 425 degree oven), then dove again and swallowed it (because he's either stupid or impervious to pain. . . maybe both.). I put the remaining potatoes back in the oven and continued in my cooking.

The second step for dinner was a basic green salad. Caen got his fill during this step. I fed him celery tops, carrot ends, and a couple of slices of tomato. He ate it all (well the celery he chewed on but didn't swallow for the most part; that was a pain to clean up). I rolled my eyes and put the salad on the table in the dining room then returned to the kitchen to work on the steaks.

I'm not that picky about my steaks as long as they are bloody rare. Matt is a little bit more so, and I know he would prefer well cooked, higher quality steaks, but I'm cheap so we don't usually have anything much better than round steak, which is what I was cooking tonight. I also don't grill. My steak is always pan seared. If it is thick I'll finish it in the oven, but with these really thin steaks, I just sear a couple of minutes on each side, cover it, and take it off the heat but allow it to stay in the hot pan. Gordon Ramsey am I not (Yoda may I be). Here is where Caen's waiting really paid off. He got tossed several pieces of fat, most with a good deal of meat still attached because I'm not exactly a skilled butcher.

I forget what brought me back into the dining room, but I found Carlton on top of the table, eating my salad. What kind of cat eats salad? Maybe he wants to be a vegetarian. On closer inspection, I discovered that he had only eaten the tomatoes, but he had eaten just about all the tomatoes, picking every one he could reach out of the top layer of the salad. I took it away from him. Crazy cat.

I'm actually really fond of both Caen and Carlton (Carlton is more my speed, since I've always been a cat person), but the begging is getting out of hand. I guess, if I want it to stop, I really need to stop feeding them both human food (the other night I let Carlton finish off my coffee ice cream . . .), but they are so dang cute!

Here are my furry babies: 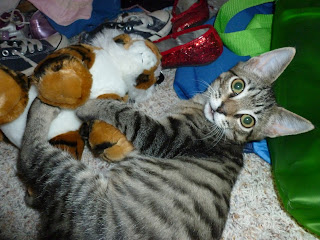 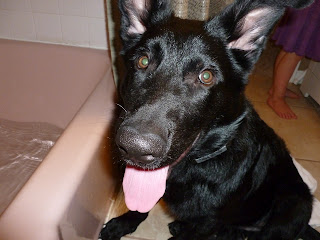