I've also mentioned, I believe, that I have a little bit of hoarder in my system. I hate to throw anything away, especially if I see crafting potential.

I don't drink much. Just not in the habit even though I like the taste of certain alcohols, but I love the bottles. One of the main reasons I don't drink is because going to the liquor store is Matt's job, not mine, and he usually won't buy any drinks that might jeopardize his Man Card. Apparently they have these Man Card Police who stand by the registers at these places and whenever a guy buys anything fruity they make him hand over the Card which is just awful. . .but the other day he somehow got past the check out process with his Card intact and a four pack of berry flavored coolers for me.

Matt was pretty quick to point out that the amount of alcohol inside these coolers is pathetic and he wouldn't let me call myself tipsy, but all I know was I was sitting there lovingly holding the bottle up to the light, turning it around and around in circles, and admiring the aesthetics of it, and I'm pretty sure that isn't a normal, sober person thing to do. The point of this story was that I kept all four bottles. I washed off the labels and I decided I was going to try a craft I'd pinned awhile back for tinted glass jars and bottles with them.

Here is the pin.

Now the instructions the pin links to involve gel food coloring, modge podge, and water. Coryn and I set up our stations and followed the instructions pretty much to the letter. I wanted to do them all in yellow, red, or blue because I like primary colors and only wanted to make one batch of dye. I let Coryn talk me into purple. We did the first one and she said, "Okay, let's make the next one pink!"

I explained that, since I was only making one batch of dye to use for all the bottles we could only make colors that I could mix into the purple. . .so we added a lot of blue and made a blue. Then we added some yellow and green and made a greenish color, and finally a little more blue for kind of a murky teal, not what I'd envisioned but when allowing a four-year-old to make the artistic decisions you get what you get. 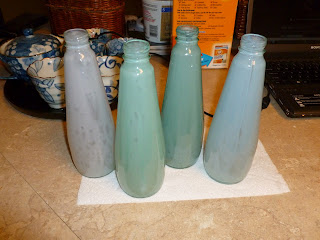 Following the pin instructions, I let them drain and then popped them in a low heat oven for 20 minutes. . .and they came out basically transparent. They looked, at best, a little bit dirty. I didn't even bother to take a picture. At this point I was a bit discouraged but
I'm going to put the blame on me not using gel food coloring. Actually, until about a year ago I'd never even heard of gel food coloring. I just assumed the only type you could buy was the liquid stuff that comes with the pointy gnome hats. . .so I decided to try it again.

Today I did it my own way. We put a few drops of whatever color we wanted to use and dropped it in the bottom of the jar. Then we added maybe a quarter of an inch of the modge podge and no water. With this thicker mixture it was a little harder to get the entire bottle coated, but we did it somehow and set them in the oven to cook.

They came out awesome!!! 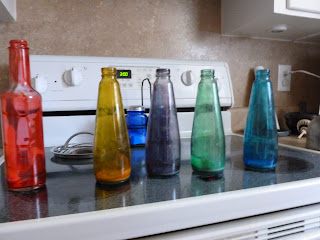 These are four berry cooler bottles and one Torani syrup bottle. 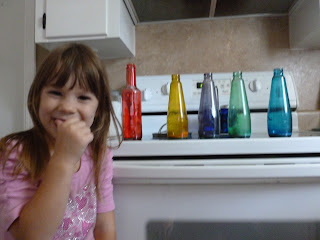 Coryn was proud of them too. 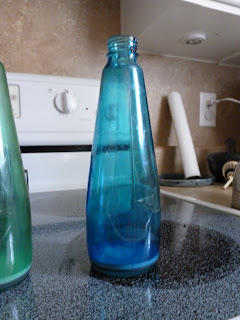 The blue one is my favorite. 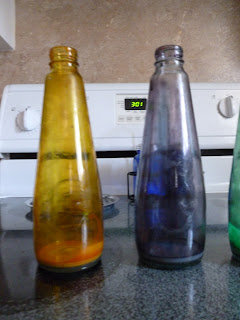 The purple one is Coryn's favorite. 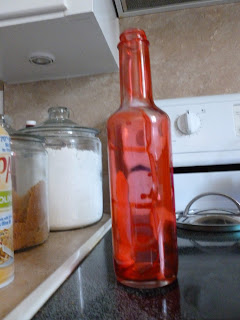 The pink one I had to do on its side because the bottle was too tall to stand up in the oven and the dye mix gathered on the bottom and streaked it a little bit. I'm hoping it looks a little better when it dries a tiny bit more.