Babies come with so much baggage.

Our daughter, Coryn, was the first grandchild on both the paternal and maternal side of things and the first great-grandchild on my side of the family. When I was pregnant with her, Matt was deployed to Iraq and I was back in my home town surrounded by family, working part time with two other pregnant mothers (my poor supervisor had three employees going on maternity leave within two months, and my maternity "leave" was intentionally also my exit from "employed" status as I fully intended to stay-at-home from then on), and an active church family. Because of that, I had three separate baby showers, not sought out but offered, and since they were with three separate groups (family, work, church) with little to no overlap on the guest lists, and I didn't feel bad about accepting.

In other words, in between the gift cards and gifts and hand me downs from relatives who had been saving things from their own baby days, Coryn had stuff. Lots of stuff.

I find that every mom has that piece of equipment they couldn't do without and that's what they are really enthusiastic about giving you. Sometimes it is a small item; people get hung up on the weirdest wonder products: disposable bibs, wash clothes, onesies. . .

Onesies would be my personal favorite. If I had to pick one thing I always seem to need more of, it would be one piece baby clothes. I don't have time (or initiative) to coordinate an outfit. Give me a onesie with a cute print or a zip-up sleeper and my baby is good. A baby should have one or two party outfits for special occasions, first time meetings that you want really good photographs to remember. . .I personally had a set of matching party dresses I wanted every excuse to put Claire and Coryn in. Coryn's still fits her (I bought it a size up). Claire's. . .well, it lasted from birth to four months or so. That's a decent run for any baby outfit. 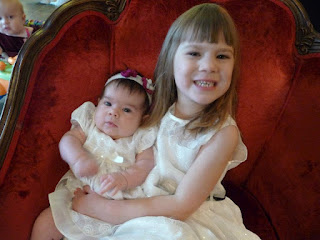 Here they are in their dresses at their cousin's birthday party. I made Claire a matching head band.

Back on the subject of stuff:

I found that 75% of the stuff people swore by as their saving grace or miracle product didn't do anything for me or my baby. I never actually used the disposable bibs. Most of the time I would forget to use the washcloths altogether and just let my baby splash around to clean herself (washcloths are good to suck on, however), and those previously mentioned coordinating outfits? Well, I'd get one wear out of them before the pieces got separated and then I'd just match them with whatever was close at hand or. . .Hey look! Another onesie!

Some items I thought I'd want ended up being a waste of space. For some reason, I thought a baby wipe warmer was a really cool idea and was happy to get one as a gift. I used it for awhile until I moved the changing table out of reach of a power outlet and then it kind of just sat there. . .I didn't get one when we had Claire and didn't miss it. Also, the baby monitor. I rarely remembered to plug it in and I was always getting the wrong signals from it. Those things love to pick up the monitor of the family across the street. I did get a used one when we had Claire and then Caen chewed up the cord and again, I haven't missed it.

One item that was always on my wishlist was a "Sleep Sheep." I just thought they were adorable.

I never got one with Coryn, but when my sister had her baby about a year later, I got her one and asked for a review. She said her daughter loved it but liked the "whale song" sound the best and she felt that was creepy. I have a high tolerance for creepy, quirky, and off kilter, so when I was pregnant with Claire and found one at the thrift store for $5 I picked it up. Unfortunately, my experiences weren't so great. I could never seem to keep it running for more than a few minutes and was always having trouble with it being too quiet. I couldn't tell if I'd bought a defective one (it was used) or if I just had the settings wrong (no owner's manual). Either way, it didn't get much use.

Other items I was swamped with:

Blankets: everyone gives blankets. They're cute and easy and you can make them if you are any sort of a crafter. . .but dang, I was drowning in "special, home made blankets with sentimental value." Some got shut away in drawers, I made a couple that matched my color scheme into wall hangings simply by pinning them to the walls, and Coryn picked out a fleece tie one as a favorite and still sleeps with it today. . .but after that experience, even though I love to crochet and can make a pretty baby blanket, I am never going to give another new mom a blanket again.

Bibs: bibs are cute. A lot of outfit sets come with a matching bib. Bibs often have cute saying on them. Bibs are so annoying. I don't know why, but I don't like bibs. I groan inwardly whenever I unwrap one because they are just silly. The food still gets everywhere. It's just one more item to wash. . .I did get one or two home made ones that were pretty and I'm saving just because they look nice, but I never use them and the drawer full of bibs with cute sayings people have given me? Future yard sale fodder where I'm sure some lady will pick them up and squeal, "Look at these like new bibs! I must have them!" At least that's what I'm hoping.

Shoes: if the baby isn't walking, the baby doesn't need shoes. That's my position on the subject and all I have to say on the matter.

Socks: similar to shoes. Give me footie pajamas instead. The socks are just going to get lost anyway. Think back over your life. How many times have you seen a lonely baby sock sitting on the side of the road? If you have a child, how many times have you gone grocery shopping with two socks and come out of the store with one? Admittedly, the ones that resemble shoes are really cute but when you can have footie pajamas instead, socks are kind of a novelty item (Oh! Look how tiny! Let's bronze them and move on.).

Novelty picture frames, piggy banks, and other decor items: unless they are on a wish list they are a pain to incorporate into the decor. Even if they do match, they are just more things to move while dusting. I'm not a person who plans out the decor of any room, but if I were, I think I'd like to pick the items myself rather than have to squeeze in random knickknacks provided by others. This is what online wishlists are for, people.

Baby mitts: I loved the idea of these cotton mittens that supposedly would keep a baby from scratching his or herself, but Coryn hated wearing them, would always get them off somehow, and really, is it that awful if they scratch themselves a tiny bit? If their nails are drawing blood, trim them. Otherwise, I kind of just learned to chill over the little pink lines that Coryn and Claire left on their skin from time to time.

Needs and wants differ from person to person and even baby to baby. I never used a play pen or pack and play for Coryn (though my mom had one and we used it instead of a crib when we were staying with them). With Claire, sometimes I need a place to put her to keep the dog away from her or to keep her contained because the wood floor is too covered in dog hair for her to crawl on and I can't sweep while I hold her.

Also, pacifiers. Coryn never wanted them. Claire is addicted to hers. She was fussy all morning and I tried everything to get her to be happy. Nothing work until the "pacie" was found and then she quietly sat on the floor and sucked.

Teething rings I never found did much good for teething, but I kept a bunch in the freezer and whenever Coryn bumped her teeth, I would give her one as a toddler.

I guess when dealing with baby stuff, less is generally more. After all, what they don't stain or lose they'll grow out of before you know it. Just enjoy having a baby and don't worry about the baggage.