A couple of days ago Coryn got into a tug of war with our puppy over one of her shirts: a really cute, black and gray shirt that had a fake two-piece look to it and a tie in the middle with a silver flower embellishment. . . She knows she isn't supposed to play that way with the puppy, but she does from time to time, and this time it cost her a big hole in the side of her shirt.

Coryn loves clothes. She loves shopping for clothes. She has a definite sense of style and will sometimes accessorize herself to death if allowed (I don't really care if she looks a little silly when we go out, but she also sheds these accessories as she goes, so I normally make her leave them at home just so we don't have to endure the trauma of loosing precious sunglasses, hats, hair clips, and belts).

She was actually rather upset about losing this particular shirt, and considering it is one of the non-pink items she likes to wear, I didn't particularly want to lose it either. Still, I thought it would be fun to set it aside for a quiet, in door activity, so today we brought out the shirt, some scissors, yarn, and even a needle and thread and set up a doll clothes manufacturing line. 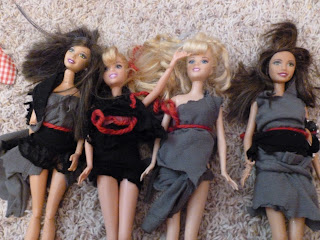 When I was little we used to get scrap fabric from my great-grandmother to play with like this, but since I don't sew or know anyone nearby who sews, I had to wait for an article of clothing to get destroyed before we got a chance to try out this activity. Mostly we just cut the cloth into strips and tied it onto the dolls with yarn for belts to hold it up, but Coryn did actually make some attempts at hand sewing. . in fact she sewed a skirt onto her blue stuffed dog. . .onto meaning it is now attached to the dog and I'm probably going to have to cut it off with scissors later. 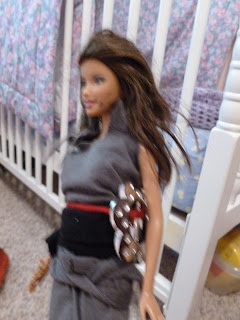 This doll got the flower from the shirt. Coryn originally wanted to make it a hat, but this worked out better.

Coryn loved making these clothes so I had to be very clear about this being a special thing for when Mommy decides a piece of clothing is past redemption. If I hadn't been clear on this, I'm pretty sure at some point over the next few days, I would walk in on her to find she's shredded her entire wardrobe to make more doll outfits. I still might, so I'm going to keep a close eye on her for a few days. Wish me luck.