I like to sign up for free samples (most of which I find through www.thepeacefulmom.com) and am also a member of several surveys for points or prizes sites. Here are a few of them:
Crowdtap gives you surveys and discussion opportunities which will earn cash for charities (they don't have all that many options for charities and none of them were causes I personally feel a strong tie to, but there are some good causes and the surveys are quick and fun). Also, if you get into the right discussion groups (you have to apply and be of a certain "level" to get into most of these), you can qualify for free samples and coupons. The one to court, as far as I'm concerned, is Old Navy. Qualifying for an Old Navy Sample and Share generally means a free article of clothing for you and a friend.

I also do surveys with My Survey and NPD Online Research. My Survey offers points which can be redeemed starting at 2000 for a $10 Amazon gift certificates (I'm currently at 3000 but haven't taken the time yet to redeem my first gift certificate). NPD Online mostly just gives you "sweepstakes points" and I've never actually won anything from them that way, but I have received a $25 special offer Amazon gift certificate for completing a longer study survey where I logged the eating habits of my children for a week, what brands of foods I purchased, etc (Ironically, they asked me to do the youngest child in my family who happens to be a breast feeding infant so I doubt they got the information they were wanting out of me).

Any way, the point to this is one of the surveys asked me if I'd be willing to test out a product (Deodorant in this case) and complete another survey after using the product for two weeks. Of course I said yes, and so a couple of days ago I got an unlabeled stick of deodorant in the mail. No real opinions on it yet. It works fine, has a really nice smell, but if they really wanted me to not know the brand they shouldn't have imprinted a recognizable logo onto it. What's the point of removing the label if you are going to do that? Or maybe I'm just weird for knowing what the "Secret" logo looks like off the top of my head.

So the point to this ramble:
I was applying the deodorant and thinking of possible, wild scenarios involving it. What if it was some fiendish plot to take over the world? What if. . .

I was living in a Dr. Who episode and this deodorant was part of a mind control plot from an alien race? If so the Doctor will rescue me. Can I choose my own Doctor? I know the 10th is the apparent fan favorite, but for some reason the 9th Doctor just seems more trustworthy to me. I guess I like guys with big ears. 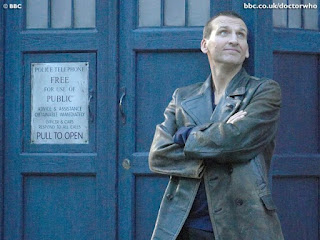 If this were an episode of House, I'd become deathly ill and the deodorant would be the final clue House (or Chase; I like to think Chase would be the one to figure it out in my episode) would find that would make him realize that I was suffering from deodorant toxicity. . .wait, I think they did that episode. . .

If this were CSI, I'd have to die, of course, and originally they'd think it was part of a huge cover up by the deodorant company, but then they'd find a speck of dust that proves the deodorant was a red herring, and it was really my seemingly friendly neighbor, introduced in an earlier scene but suspiciously unimportant considering the actor is a familiar face in these sort of shows and almost always plays the murderer, who killed me over a cheesecake recipe (Weird because I don't bake).

If this were Psych, it would be very similar to CSI except rather than a speck of dust, Shawn and Gus would solve the mystery using Shawn's photographic memory, pop culture references, and a clever ruse using bizarre aliases. . . I choose Psych over CSI if I have to die for the cause.

If this were a sitcom, the deodorant would cause bizarre side effects which mimic intoxication and I'd wake up with a trashed house, twenty new cats, and a lot of new crafting supplies because intoxicated Heidi collects cats and craft supplies.

So am I taking too much of a risk trying this deodorant sample? Well, if the Doctor shows up, I'll let you know.