It's been a good long while since I've posted a pattern, mainly because I've been working off of other people's patterns for awhile now and while I'm proud of what I have made, I don't usually post patterns that aren't original to me (Occasionally a link but not often. That's why I have this board on Pinterest).

My daughter is, like many little girls, obsessed with dancing and loves anything associated with ballerinas. We recently picked up a book from the library's withdrawn shelf (books that they don't want anymore and you can have for a donation of a quarter) called Alicia's Tutu. It's a sweet story about a little girl who becomes convinced that the "gift" her grandmother is sending is going to be a sparkly pink tutu, rather than the bed her mother keeps telling her to expect.

Awhile ago I shared a very simple pattern for a Barbie skirt and because of Coryn's interest in tutus, I decided to try it at full size.

This is what we ended up with: 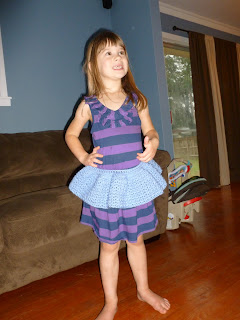 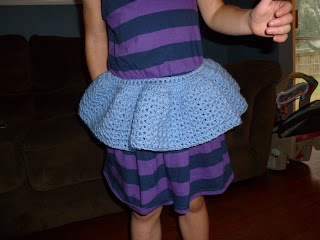 Coryn was pleased because she said it had "humps" like a real ballerina skirt. Next time I might choose to make it a little longer. You can adjust the length simply by adding on extra v-stitch rows. 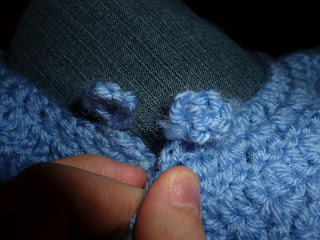 Another optional feature is this crocheted "button" that I made for the clasp. You could potentially use a real button instead or thread a ribbon around the top and use it to tie it shut (I wouldn't suggest using yarn because it has a potential to get knotted and you'd probably end up having to cut it off at some point). 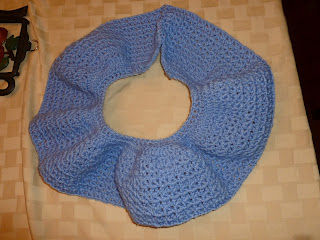 Here is what the skirt looks like lying flat.

To start off you want to make a chain long enough to wrap around your ballerina's waist plus three stitches; for Coryn, this ended up being 63 chains.

I used a fairly thick worsted weight yarn. For a finer yarn you'll probably have to make more stitches around but remember that the yarn will stretch a little bit once you start to work it and don't go too wide. For this pattern I'll use the measurements I did. Don't be afraid to adjust for your own child.

It takes about 8 rows to achieve the length of skirt I got in the picture. I considered going longer. If you decide to make a longer skirt just increase the amount of V stitch rows as you see fit.

At the end of the last v-stitch row leave a long tail to sew up the skirt. Leave a few inches un-sewn so that it has a little bit of a gap. Crochet a loop on one side. Attach a button on the other side.

To crochet your own button, ch 2, 6sc in each the second chain, fasten off.
Let me know if you try this pattern or have any questions about it.
Labels: ballet skirt crochet free pattern pattern skirt tutu