Everything is better with a secret identity!

It's costume time! The one time of year it is acceptable to dress up in public, ah, and how I relish it. I know that Halloween is controversial in some Christian circles and I've discussed my opinion on that  in this post, so if you'd like my take on that, please click and read. However, masks are not just Halloween. I personally wish there were year round Masquerade Balls, but I guess I'll just have to be satisfied with Renn-Faires and SciFi conventions.

Also, you can't be a superhero without a mask (Superman, you really need to update your look).
The other day Coryn got some used ballet "equipment" (a leotard, a skirt, and some tights) from her grandma (it used to be her aunt's) and was so excited that after we opened the package she slipped them on over her pajamas (that must've been toasty). She was having a grand old time just being a ballerina, but I was bored so I made her a quick mask out of some felt I had left over from fixing her shoes (see this post here). She looked awesome, and Captain Ballerina was born. 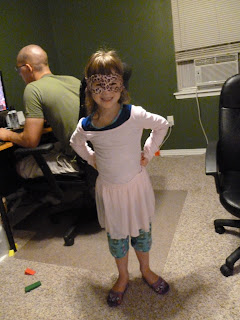 So the next day when we were at Wal-Mart I hit the craft section and came away with the supplies needed to make these: 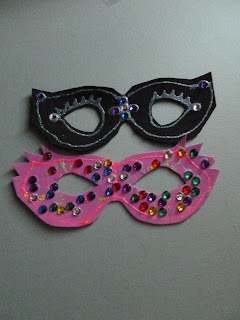 I made the black one. Coryn's is, of course, pink and sparkly. 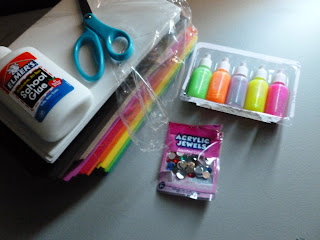 Here's everything it took to make them: some craft foam (I got the five dollar pack. They had single sheets for sell and smaller packs as well), some glue, some glitter glue, some "gems," and scissors. I cut out a pattern in paper first to trace onto the craft foam before I cut out the masks and then Coryn and I decorated. You could do this with all sorts of materials: feathers, stickers, puffy paint, glitter, ribbon, beads and buttons and bows (breaks out singing in the style of Bob Hope). I still have to attach some elastic to them for a strap, but I'm pretty happy with how they look. Captain Ballerina and the Mominator, to the rescue!