My husband hates gift giving and receiving. I guess you could say it isn't his "love language." I'm honestly stumped as to what his love language might be. For anyone who has taken a class involving the love languages, they are:

I may be forgetting one and if so that one is probably Matt's. There are two sides to the love languages, what you like to do for other people and what you like to receive. For instance, my expressive love language is probably gifts first. I love giving people gifts. I also love receiving gifts, but I would rather have someone say nice things about me (words of encouragement) than give me a gift and while I try to be encouraging, I'm not great at it with anyone outside of my close circle. Matt makes a big show of not needing or wanting all of the above in some way or another. If I were to take a wild stab at it, I'd say his is probably acts of service, which is probably the one I'm the worst at, so that's probably why I haven't noticed. . .and he HATES to give gifts. He has two settings as a gift giver:
A. Whoops, I forgot to order her something and her birthday is in two days. I better go to her Amazon.com wishlist, grab the top two items, and hope they get here in time.
B. Expensive (by which I mean non-costume) jewelry.

Not that I mind the expensive jewelry, but it doesn't usually feel that personal (even though he has good eye for stuff that meets my personal style without being "tacky." I admit my style is . . .off kilter. I have a friend whose husband once described her style as "cowboy Hobbit." I wish I could think of a cool name for my style, but as I may have mentioned before, I think Cats is a valid theme to decorate with, so I could probably use a style intervention in other ways as well). 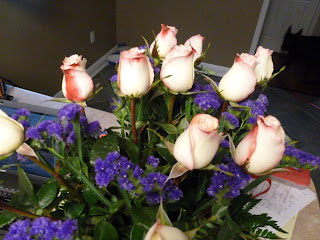 So, Matt dislikes buying presents and I can often tell that his presents are last minute (he's one of those guys in line at Wal-Mart on Mother's Day with a bouquet of flowers and some random DVD he thought I might like), and because of this I appreciate whatever effort he puts into gifts . . .like the other day when he brought me home the above pictured flowers for no particular reason, I was thrilled even though he included a card that said, "To my nephew" with it because all the cards for wives were "too sentimental." Apparently no one ever told him about blank cards.

The best gift Matt ever got me was probably my espresso machine. . . definitely my espresso machine. It means something to me because he listened about it. It was sometime in November and I mentioned that I really wanted one and came straight out and said, "That's something you could get me for Christmas." Yeah, I knew what I was getting that year, but I knew that he was paying attention and that's more meaningful than a surprise. 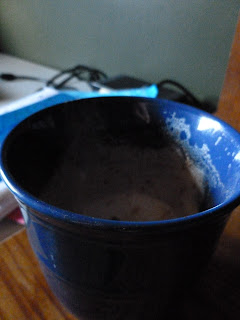 I did the same thing a couple of Mother's Days ago with a brand of perfume that I felt was too expensive to buy for myself. I tried a sample of it a few weeks before the "big day" and then told Matt, being less direct than I was with the espresso machine, that I really liked it but it would have to be a gift because it was too expensive for me to justify buying. Luckily, he's smart and got that one.

I have a hard time buying gifts for my husband because he won't tell me what he wants and buys whatever he wants for himself . . . like the year he ordered himself a kindle two weeks before Christmas. Really? You couldn't have asked for it for Christmas and waited the two weeks? Of course, the one holiday (his birthday two years ago) that I didn't get him a gift (long story involving an order getting lost by the merchant I was dealing with) has also been brought up again and again and again.

So anyway, this was sort of just a ramble, so I thought I'd end it with some random things. First off, here is a screen shot I took of a survey question I was asked the other day: 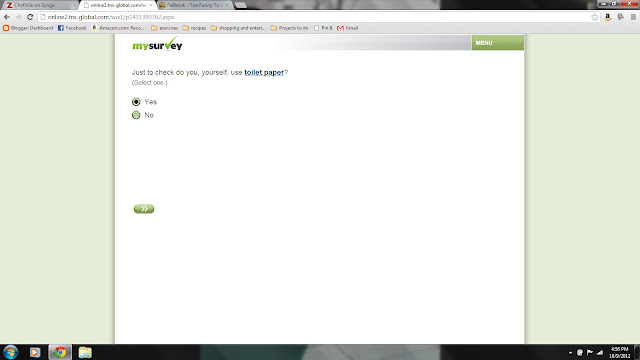 If you can't read that it says, "Just to check, do you, yourself, use toilet paper?" Omgosh. . .I don't know what is worse, the question or the fact that they feel they have to ask it (it was a survey on what brands of toilet paper you buy most frequently).

Also, to white wash any bad images that survey question may have planted in your brain, here is some absolute cuteness: 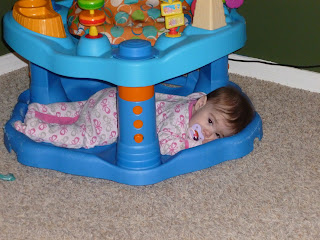 Claire taking a rest underneath her saucer seat. 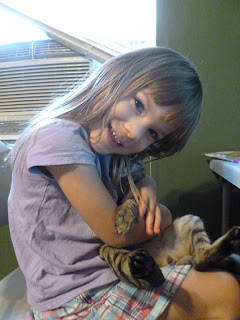 Coryn getting some loving from Carlton, her best buddy.

Also, here are my penguins who are now available as a family on my Etsy account: 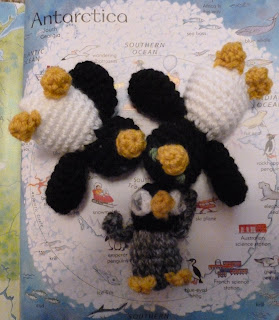 Yay! Penguins! I'm making a large sized set of penguins for my niece for Christmas. I'll post pictures of them when I'm done.