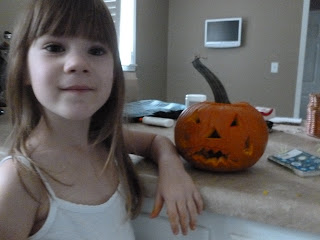 For the second year in a row Coryn insisted that her pumpkin be a "sad" pumpkin and have tears. We made roasted pumpkin seeds with his innards. For a change I put brown sugar and cinnamon on them instead of the usual salt and oil.  They tasted really awesome. 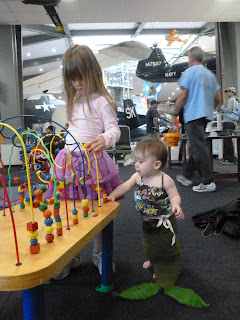 We have been trick or treating twice already and it isn't even the 31st yet! We went to the Naval Aviation Museum first. They had limited candy grabbing opportunities but an awesome play area that both the girls enjoyed. Coryn's costume this year is a simple "ballerina" out fit that she mostly designed/picked out herself. Claire, of course, has her awesome mermaid tail. Both at the museum and today trick or treating downtown businesses it got a lot of notice. I can tuck her legs inside of the tail and it acts almost like a swaddling blanket, keeping her nice and toasty, while I hold her. The tail drapes over my arms in this position and just looks awesome. People stop and do a double take when they see her and then break out in big smiles which makes me feel awesome.

It got a lot of compliments today, maybe too many because I think Coryn was a little jealous that everyone noticed the "mermaid" but so few said anything about the ballerina outfit she was so proud of. I'm glad she got to be what she wanted, but maybe next year I'll try to lead her towards something a little flashier. Of course, it is really hard to compete with a baby in a mermaid tail.