I've blogged a couple of times about Caen, my husband's dream dog and in his absence my constant companion and protector, and the ups and downs of having a large, active, hairy dog in the house (In the post title I called him a "German Shredder" which I'll get into below but the other name for him is "German Shedder." Seriously, sometimes I can literally see the fur falling off him onto my just swept floor). Caen is a gorgeous boy. He's also a big boy and while he is technically still a puppy (Matt says that at this age he is considered an "adolescent" but he still has puppy eyes) he is already stronger than me and bigger than both our girls combined (adult male GS dogs range from 75-95 lbs. Caen is not quite in this range yet, but he is well on his way towards it. His father, who Matt met when he picked Caen up from the breeder, was definitely over 90 lbs. A lot of people assume that he is a mix because of his coloring, but he is actually a purebred from working dog stock (as opposed to show dog). He is sneaky smart but a big baby who assumes he is a lap dog.

Since Matt left for training he has been getting away with a lot. For instance, he has been sleeping on the bed. I know I'm not supposed to let him up there, but the first time he jumped up and lay his head on my shoulder when I settled down for the night I just melted. When Matt is here he generally sleeps shut into his kennel/crate, but I like the idea that if someone broke in they would have to face Caen, so I keep him out when Matt is gone.

That said, Caen is a bit of a mixed blessing. Having a dog as large as him can be a hassle. He has never intentionally hurt the baby (as you can see from the picture, they are best buddies), but a few times she has walked up behind him and been knocked onto her bottom by his swinging tail (that thing is like a club). He also automatically assumes that if I am sitting on the floor he is supposed to be in my lap, but he really doesn't fit in my lap any more. I mentioned the shedding  . . .oh, and he chews things. TO PIECES!

My husband is a researcher by nature. Before he gets involved in or with anything he reads about it extensively. He therefore was not at all surprised when I started complaining about items around the house coming up masticated.

"Yeah, well, on the forums they call them German Shredders," he pointed out to me. Great. I have a dog who not only chews things into itty bitty bits but has a cute nickname referring to the fact that he does so.

Sometimes I look the other way. Oh, whatever, he ate another one of Coryn's toy blocks. Ah, there goes a sock. Whoops, I guess I need to keep him away from the mail. Other times, when his destruction touches something I care about, I flip out about it (I've lost a new pair of shoes to him twice, also a nursing bra, and some pieces to the girls' wooden puzzles, among other things.).  I tell Coryn to keep her bedroom door shut so he doesn't make off with her toys. I put shoes out of reach. I keep the laundry hamper and the garbage cans being closed doors as well. These are just precautions you have to take when you live with a predatory beast who assumes that if it fits in his mouth it is designed to be gnawed on.

But sometimes I get careless, especially when I'm dealing with things that no one in their right mind should mistake for chew toys.

Yesterday was one of my careless days.

I had just gotten back from shopping and had several shopping bags filled with random stuff, but none of it was food and none of it should've been tempting to even Crazy Caen. Of course, I was wrong about that. A little later I came downstairs and found out he had gotten a hold of a bottle of lotion, brought it into the bedroom, and started chomping away. There weren't that many puncture marks. From the look of it, once he got some of the contents into his mouth he realized that he didn't care for the "cream filling." Still, there were several holes in it. He also taken a bit out of a roll of wrapping paper, but I can just cut around the torn parts on that so that isn't so bothersome. 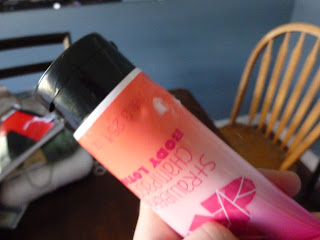 It is especially bothersome because the lotion was meant for my partner in the Cara Box swap, Sami with Forever and Always a Sailor's Girl. I had been pretty much done shopping but now I feel I need to go back and get at least one more thing.

Of course, I also need a microwave. Ours stopped working the other night and since the girls and I have been eating a lot of reheated leftovers lately, it is a real pain. It just wasn't on my to do list to purchase a microwave this week.

So I guess I have to go shopping anyway. Blah. I love you, Caen, but I think I'm going to remove your teeth.