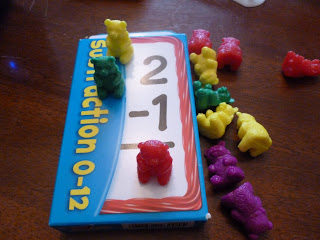 I should preface this by saying I have absolutely no qualifications whatsoever as far as preschool education goes. I have no degree. I have only been dabbling in teaching with one child, just one, and while I was home schooled myself, I was never really in a situation where I was actively teaching younger children.

If you have read my blog, however, you may know that I have strong opinions about education for young children. I don't think our current systems allows children to be children. I think it puts way too much emphasis on conformity and sitting still and standing in line. To me it just isn't how humans, especially young humans, are meant to function. To me learning should be organic, a natural process and teachers should be more like tour guides than. . well. . .teachers. Almost everything young children encounter in the pre-reader age is "educational." They are learning how the world works, and let's be honest, the world does not usually work in a straight line sitting still kind of way.


When we were in Japan there were only a handful of spots available in the early childhood (preschool, headstart, whatever they are calling it now) classes at the Child Development Center and I heard a lot of mothers complaining that their kids couldn't get in because classes were full (I'm not sure how the priority system works because I never investigated it) and they felt their kids would fall behind if not in a class by three or four. As if kids can't learn shapes, counting, and the alphabet without a structured classroom and a teacher with a Masters to lead them by the hand. This was often followed up by a complaint that their kids wouldn't "learn from them." Usually the moms with these complaints were mothers of boys, so I'm thinking "my kid won't learn from me" might be code for "my kid won't sit still for long enough to do work book pages." I admit, girls are a little easier in this regard, though I've known plenty of "twitchy" little girls (my daughter sometimes watches TV hanging upside down off the back of the couch.), so if your kid doesn't like to sit still, tends to get wriggly and distracted, and has trouble focusing, congratulations you have a son! (or an active daughter)

Boys especially are at a disadvantaged in pigeon holed modern education. Honestly, they simply don't belong sitting still for long periods of time and with the epidemic in childhood obesity, I am not really sure why the ability to sit still would be considered a virtue. So much of our modern society involves sitting still. I think little kids should be applauded for throwing off the fetters of staying in one place. I love watching "feral" children, children who are not being made to do anything they don't want to do in that particular moment, running and shrieking, all giggles and glee. . .and if kids are given as much feral time as they need, I think you'll find that when they really need to settle down, they'll have a lot more motivation to do so (and to get a good night's sleep for that matter).

There are steps you can take to improve childhood focus (from nutritional to limiting the amount of time in front of the television to more complicated exercises/games, but that's not the point of my post.), but if you are dealing with an active preschooler and want to get a little bit of home education in, remember that at this age almost anything can be a game.

Board games are a good indicator of whether or not your child is ready for sit down preschool sessions. If they can sit through multiple rounds of Chutes and Ladders or Candyland, they can probably sit through a set of flashcards if the flashcards are presented in an interesting way.

My last post on preschool tricks was about sight words. Before I stumbled upon the sight word story game (which my daughter actually asks to play) I had been attempting to make her go through "sight word flash cards" that I purchased, and the way her eyes wandered away from those cards was painful to watch. I could keep her attention for a handful of words, but then she was looking around the room and I could either crack down or give up. One made her miserable. The other meant nothing was learned. Kids don't do well with information presented in lists and charts. The addition of a creative or tactile element is often all it takes to turn a "drill" into a "game."

For instance, adding a visual aid of small plastic toys to count to addition or subtraction flash cards makes early math a breeze.

If your child likes to color workbook pages are going to be easy to introduce. If your child does not generally like to sit still for any reason, then just introduce "sitting time" it in short spurts and "release" them when their attention starts to flag. If you start early enough you will have plenty of time to build up. Set aside quiet play time. Try puzzles, crafts, building sets. Try to find the thing that gives your particular child motivation to focus and build on that focus. Take advantage of what interests your child. Legos make awesome math learning aids.

Your kid does learn from you. Even if you are not actively teaching, if you are present your kid is paying attention. Take advantage of every moment. Explain how things work while you are doing them. Why does water boil and ice melt? Cut open flowers and show them what is inside. Have them count out things. Let them dress themselves and match colors. Have them sign their name on their artwork (so people know who did it). Learning is not a formula. It's a way of life. Foster it. Don't try and mold it and don't be frustrated. Kids are ready when they are ready and no two children are alike. When they are ready they'll let you know. Just be waiting to answer their questions when the time comes.