I recently said something in a casual email exchange with someone whose name/relationship to me isn't important in this context that I think alienated them . . . at least they have declined to reply to me since that, so I'm thinking I may have annoyed them. Honestly, I'm pretty casual about people I meet. I have very few "good" friends and don't particularly want that many more. I like people to like me, who doesn't, but if someone wants to write me off for something I disagree with them on or something I don't take as seriously as they do, then fine. Gives me more time to work on the dragon themed romance novel I'm writing.

However, I started thinking about the context of what I said, and I realized that this is going to come up again, probably, and not just with this subject, but with a lot of subjects because I have a general life philosophy that paints almost every opinion I have and almost everything I do. No, it isn't my belief in God, though that is also central to my thinking process, or my belief in Grace in Jesus Christ, though again, central. . . though to explain, I guess I need to go into what the original discussion was about.

It was a simple question. The other person asked me in what ways I like to be "green?"

Now, in a lot of places in life, I'm an optimistic, fairy tale believer, but when it comes to the whole green thing, my skeptic level is pretty high. I didn't want to be too flippant, but I wanted to be honest, so after some thought, I replied as follows:

I was going to say I don't think I do anything intentionally green. I grew up in the 90's and it seems like every time I turned on the television I was listening to a "green message" about how we must save the planet and it kind of made me a cynic about the whole "environmental" issue. I do, however, I realized do a lot of things in the name of "thrift" and avoiding waste which could be considered green. For instance, we always use both sides of paper. I'll print up a worksheet on one side and then put it in the "drawing paper" pile so Coryn (my five-year-old) can be an artist with the other. I've been trying to compost since I would really like a garden, but I think I may be too lazy to start a garden from scratch (if the beds were already laid out for me , I think I could do it, but the thought of digging up a section of yard and marking out beds has me very much overwhelmed), and I save weird things, like coffee grounds which I use for exfoliating, orange peels which I fully intend to make essential oils with, and plastic and glass containers. Where being cheap and being green meet, I generally am there.

Which I thought worked for me. After all, the question was about getting to know me and I wasn't going to pretend to be an environmental activist when I am anything but.

But I don't think my email buddy cared for my response, just based on their lack of response and some other little hints.

Thinking back over it, I realize that a lot of things I do are front in center in grassroots green campaigns: I like thrift stores, garage sales, and hand me down clothes; I horde glass jars; I recycle . . .but no, green is not a color I plan to paint my day to day life simply because the whole movement is full of people trying to force their personal opinions and choices on other people via laws and shaming, and even when I agree with an idea that annoys me.

Because that overwhelming, central philosophy I mentioned earlier is "there is nothing more important than individual liberty."

I grew up reading "Uncle Eric" books and moved on to Frederic Bastiat and other classical liberal philosophers. I believe there are only two laws that matter: do not harm another living person and do not violate another person's property. In my belief system, every law that does not stem from one of these two concepts is  unnatural and will inevitably do more harm than good.

Because of this there are a lot of movements I am never going to get into because for all their grass roots goodness where they are just trying to inform people of choices that they can make and the consequences of those choices, they almost always turn into lobbies where they are trying to pass laws to tell other people what sort of bags they have to use at the grocery store, what sort of light bulbs they have to have in their house, or what sort of car they have to drive . . . and if, for whatever reason, you choose to exercise your personality liberty  and reject one of their "you musts" you are labeled a bad person and next thing you know they are arguing in front of congress that your right to choose is not more important than their belief that your shopping bags are doing irreparable harm to the universe.

I also suspect that a lot of "green" is just clever marketing, the way that words like "organic," "natural," and "part of a nutritious breakfast" are often meaningless or misleading.

When I was little I read a book called "Facts, Not Fear" that held up examples of environmental activism gone wrong as a sort of morality tale to explain why panicking over a situation and forcing change can sometimes back fire. My favorite story is how the campaign against the McDonald's clam shells  (the Styrofoam boxes hamburgers came in way back when) caused them to quickly change their packaging to paper wrappers which actually had a higher environmental impact. A lot of environmental activism seems to be based around panic rather than facts. It's about getting people wound up or shame faced so that they feel like they need to do something or giving them a chance to feel smug about things they do that other people do not do.

You might say, wait a minute, you mentioned you were a Christian. You believe in right and wrong? Right? You believe that there is good and evil and therefore some things people do are wrong.

Of course I do.

But I also believe a person needs to come to these beliefs, these choices, based on their own free will and the movement of the Spirit in their life. It isn't my job to go around shaming people who don't go to church and don't tithe and don't love one another up to the standards outlined in the Holy Bible. For one thing, I would be a hypocrite for every Sunday morning I've slept in or every time I've ever rolled my eyes at the immodestly dressed girl in the Walmart checkout line and made assumptions about her lifestyle. Shame is a blunt weapon that might knock a few people into heaven, bruised and bleeding, but will send more fleeing for cover. If your intention is to shame someone into something, anything, you need to take a step back and take a look at what you  are doing and why (which is another hypocrite moment for me as I think of the last time I told my daughter in my long suffering voice that she needs to stop doing something because she is giving me a headache.).

The best thing about the Christian philosophy, if you really read it, is it starts with the "you are forgiven" and then lets Jesus inside so that you have the tools to fix yourself as He calls things to your attention. It orders us not to make assumptions about others. We are supposed to love them, not shame them.

And to me that goes very well with my over-arching philosophy of FREEDOM. 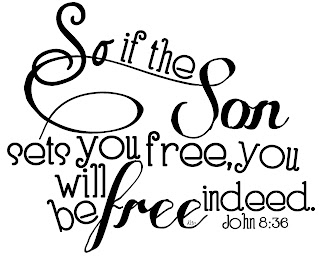 
So yeah, if you are convicted to live a green lifestyle, go ahead and use reusable shopping totes. But for goodness sakes, if you ban my disposable ones, I'm no longer going to have my source of free garbage liners! Better start stockpiling. . .

So yeah, your personal weight loss journey has soured you to McDonalds, but my daughter really likes her special treat hamburger now and again, and I don't need you lecturing her little tender mind about how she shouldn't put that stuff in her body or she is going to be obese.

I actually feel the way about the "Green" crowd that I used to feel about "feminism." I agreed with a lot of the philosophies of feminism but couldn't get past the man haters and abortion activists and the people who would denounce my plans to be a stay at home mom, so if anyone approached me using that particular label I would shy away. I think now I've learned to accept that you can embrace parts of a philosophy without having the whole of it burdening you, and maybe someday I'll get  over my Captain Planet and Ranger Rick are trying to make me feel guilty for using paper plates and killing the spotted owls that comes from growing up in the environmentalist over kill that was the 90s (I actually kind of wanted to be the kid with "heart" powers. Is that crazy?).