Today I was expounding on various theories involving the ever tricky plot lines and twists of Doctor Who and after writing what amounted to an essay on various theories about the "Impossible Girl" I took a step back and realized that what makes me a Geek isn't my taste in literature and entertainment so much as my ability to obsess about them.

The problem with Geek fascinations is that they allow you to write papers worth of speculation if you actually take the time to try and puzzle them out. Everything Geek is bigger on the inside. I prefer the term Geek to Nerd not because I find Nerd to be derogatory but because I don't consider myself "smart" enough to be a Nerd. To me a Nerd needs to be able to fix computers or chart star systems or replicate DNA or something like that. A geek just needs to be fascinated by something, to be excited by something, to enjoy forms of entertainment that provide both escape and an opportunity to think creatively.

Math and sciences were never my subjects. I preferred history and literature.  I still do. I consider myself above average at puzzle solving and I almost always know who the bad guy is in a television show, not because of evidence but, like one of my fictional heroes Castle, because I understand stories. I suppose I could be a word nerd, but I'm a little too scatter brained to really embrace the title. I've always been Geeky about my fascinations by the definitions provided above: the ability to be unashamedly obsessed with something and demonstrative about it . . . and to over analyze it. It started out with cats, in all honesty. I have always had an unhealthy fascination with felines. Later it was the Boxcar Children and Nancy Drew, not geeky but long enough series that I could devour one after another after another . . . Then I found Narnia but it didn't really take off until I got into Lord of the Rings and Star Wars.  . . and the Geekiness started to pile up. I liked large universes. I liked to be able to think about my fiction. I liked to be able to write fan fiction . . .I'm not into every single Geek show/book/etc but I have a basic knowledge of most of them. I am a little into gaming, but I'm not exactly 1337, if you know what I mean.

Geek is now becoming a bit more mainstream (I think partially because a lot of particularly handsome men are involved in Geeky activities). There are also a lot more Geeky options. It isn't just Star Trek/Star Wars any more. It isn't just Scifi and Fantasy, though most still fall into one or the other of these categories. There is more demand which is breeding better series with more money behind them. 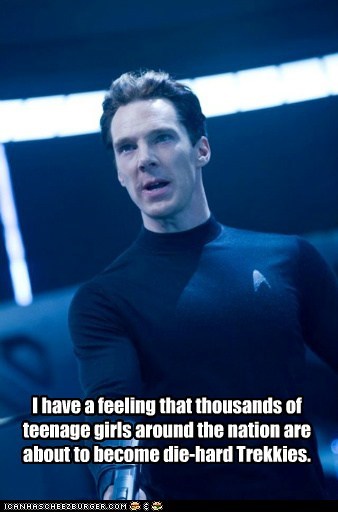 So I may change obsessions every few years. I am not as into Star Wars as I once was (thanks a lot, prequels, gag) and a lot more into Doctor Who than Star Trek at the moment, but the underlying condition of Geekdom means that whatever I am into I am going to be all in! Fully devoted and running one hundred different theories about plot lines and background stories at any given minute. That is the joy of Geek!
Labels: Doctor Who entertainment fascination geek nerd Star Trek star wars