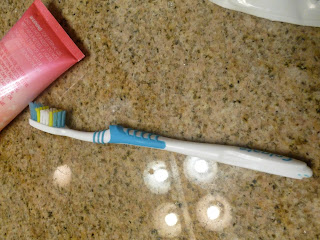 When I was in high school the boy I had a crush on owned a plastic-blue windbreaker jacket which, for the longest time, it seemed he wore every time I saw him. I remember that that color was so associated in my mind with the object of my affections that anything the same shade would cause a pleasant jolt in my brain, a sense of well-being and adoration just remembering that he existed.

It's been roughly fifteen years since I've even seen that jacket. I doubt he even remembers it, but I know he remembers me because after a good deal of patience and persistence on my part, he now calls me his wife and the mother of his children.

But that ability to imbue objects with sentimental powers has  not abandoned me. Tonight I walked into the bathroom and there it was, my daughter's toothbrush, sitting out on the counter where she tends to leave it rather than putting it back in the toothbrush holder.

The jolt was so familiar that I was immediately taken back to the days of that blue jacket. It was the exact same sensation: he exists therefore I am happy. Now, however, it was my daughter's existence called to mind.

But the joy was the same.

I'll never forget that blue jacket but now a toothbrush sits beside it.