I'm not a goal orientated individual. I'm really not. I've never actually used a day planner. I've gotten them as gifts once or twice but I just spent an hour writing in the birthdays into the calender section and admiring the cat pictures on the cover before tucking it away somewhere until the dates became obsolete. I've learned to write to do lists so I don't forget anything too important (and just for the fun of crossing things off), but if  I had my way I'd always do things spur of the moment, as they pop into my head, on a whim, etc. 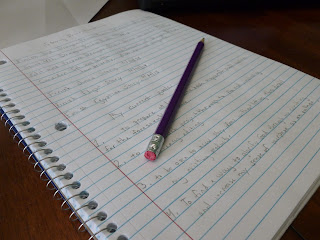 It was finally deciding to do National Novel Writing Month last November that sort of kicked me into gear and got me out of my slump. You can catch up on that journey in several posts starting here that I made in November and December of last year, but to summarize, it was having the ability to see how much I was writing a day and how much closer each day that got me to my overall word count goal that lit a fire under me and I completed my first full length novel since getting married.

Since NaNoWriMo ended I've been a little less diligent. I don't have the handy word count tracker any more and I'm still easily distracted, but I've finished another novel (the sequel to the one I wrote in November) and have been slowly chipping away at the third part to that series. I also finally got around to epublishing one of my stories (the one I wrote just before getting married, actually).

(as always, please consider checking out that ebook on Amazon. I'll link it again for your convenience and mine.)


So today I was trying to focus on what to do next . . . well, actually, today I found a pile of notepads that I had bought at one of the back to school sales simply because I have a notebook addiction and I can't pass a display of notebooks without at least checking to see if they are a good deal and because I had these notebooks I decided I needed to justify having them and write something in them. . . so, now that we are being honest, my first thought was to write down all the story ideas that are currently the most laid out in my mind and put them in order of potential so I could narrow in on what order I should do these projects. So I started writing down the ideas and then went back in and added self-inflicted deadlines of when I would like to see things finished. The following is what I ended up with.

The deadlines looked nice at this point but from my own experience sitting on a basically finished novel for seven years before I finally got around to self-publishing it (I did submit book proposals/query letters/sample chapters etc to a few publishers a handful of times but obviously never was accepted), I knew that having a book written in a file somewhere and publishing it are not even close to the same thing. So I continued with some more concrete goals.

The last one is going to be the most difficult to realize because while you can force yourself to write, you can't really force a spirit of purpose or a spirit of submission to God. While I consider myself a Christian author, there are various reasons why I don't try to write "Christian fiction." Growing up I never appreciated preachy books and I was skeptical of Christian fiction that was basically just normal fiction with a salvation message or a moral shoehorned in. I decided I didn't want to write that way, so I decided just to write what stories interest me but every so often to slip in something that was important to me. My characters will occasionally reference God or prayer, but the few times I have tried to add in a salvation story line or a spiritual moment, it always does bring me back to those shoehorned moments in novels I read as a kid, probably because I still have too much immaturity, both as a writer and a Christian, to write said scenes more believably.

Still, I have principles by which I live my life and write my stories. I believe in the concepts of good and evil and write accordingly. I believe in loyalty and fidelity. I believe in love and marriage. I believe in children. I believe in valuing someone according to their character first. While I try to allow my characters to have real and believable faults, I try not to glorify the faults. . .so while I want to write a good story first and foremost, I also very much want to write something that inspires good things, inspires hope, and maybe even gives readers a sense of a loving and magnificent Creator.