Note: several of the images on this site are from artists on deviant art. Please click through the source links at the bottom of each image.

Yes, Dragon's Curse is a fantasy but I also have to classify it as a romance. Because of that I thought I would devote a post to some of my favorite romantic couples.

Aragorn and Arwen from the Lord of the Rings the books are very different from how they were portrayed in the film, which is one of my major beefs with the movies. I'm not necessarily talking about Arwen replacing Glorfindel. That I don't mind so much, though it is a departure from the books. What is more aggravating to me are the changes made in Aragorn. In the books Aragorn was much more determined and confident. He never would've let Elrond talk him out of his love for Arwen. He never took his eyes off the prize that was his rightful heritage. He was willing to fight for her. She was willing to wait.

If you want to really appreciate this couple, you  have to read The Tale of Aragorn and Arwen in the appendices. The text in the novel regarding their love is blink and you'll miss it.


The brevity of the text, not the quality of the romance, is why I kind of have to put them below Faramir and Eowyn on the list. Faramir and Eowyn are adorable lost souls who find each other almost as a mutual reward. Eowyn was actually portrayed very well in the movies, but Faramir got skimmed over because he isn't Sean Bean (?). A lot of his character was altered. He also was a lot stronger in the books than in the movie.

Slightly less epic but very dear to my heart are Tom Paris and B'elanna Torres from Star Trek: Voyagers. He's a bad boy with a heart of gold who tends to act impulsively and occasionally selfishly. She's a wounded warrior with a temper. When they both mature into a loving couple it is simply awesome. Tom was probably my first television crush. I still adore him. Which leads to my number one couple: Leia and Han from Star Wars. Yes, I know, predictable, but I grew up hoping that someday I'd tell a man I love him and he'd answer, "I know." Again we have the "bad boy with the heart of gold." Self-confident, brash, but loyal and self-sacrificing in a pinch. It doesn't hurt that she's also brave and capable and they develop what appears to be mutual respect and admiration rather than some sort of love at first sight mush.

So, those are my favorites. 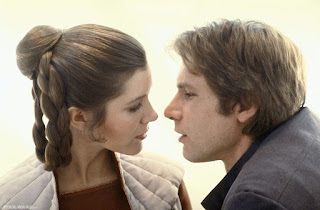 Some runners up were Becket and Castle from Castle, Amy and Rory from Doctor Who, and Fiona and Michael from Burn Notice.
(I'm sorry, Shawn and Jules, you are adorable, but not quite epic enough)
Do you have favorite fictional couples?
Labels: Burn notice Castle Doctor Who Lord of the Rings love romance Star Trek star wars