My first Kindle Countdown deal was a major success by my standards, but I didn't research or plan it very well, so I thought I'd do a little more promotion and see if I could increase sales. If you're a new self-published author, this post is meant for educational purposes. I hope you can use some of these sites to promote your work.

First off a friend recommended this site: Ereader News Today. There is a bit of a waiting list for this site, so you do have to plan ahead. Also, they do  look at your book on Amazon and take into account your reviews, and you do either have to be bargain (99 cents) or free during the promotion.  I went for the 99 cents option. I'm hoping to run Dragon's Debt through them soon. They only allow a book to be promoted once every 90 days, an author can run multiple books. Their fee depends on how many books you sell during their promotion day (somehow they magically know and will send you an invoice a week after the promotion).

Anyway, I also filled out some forms for various "free to advertise"sites. There is a big list here.


My countdown promotion ran from August 1st to August 7th. I chose the tiered approached where it was at 99 cents for the first half then $1.99 for the remainder of the period. Ereader News advertised my book on the second day of the promotion.

Here you can see the chart from my "Units Ordered" report through that period. 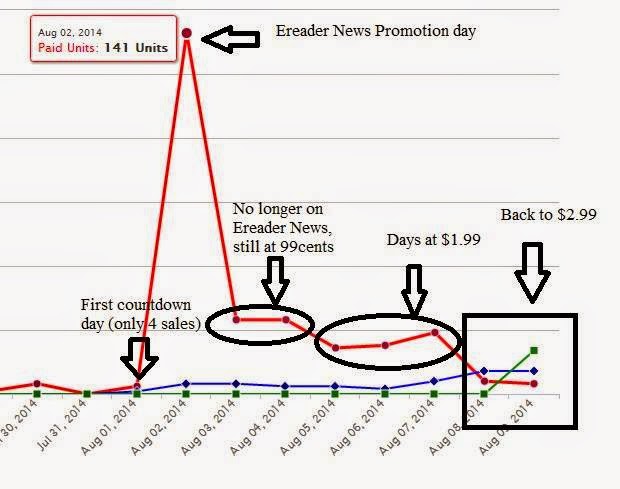 For whatever reason, my promotion had a rough start. The discount didn't go live until about noon. I don't know if it did the same thing the first time and I didn't notice or if something else was up. For whatever reason, I only sold 4 units that day. Not an "awful" sales day but pretty average. I've had days where I've sold four units without any sort of promotion or discount.

However, the next day my Ereader News promotion kicked in and DANG! I sold 141 units, 137 of the book I had on promotion and a few of my other books.

The next two days did not hit quite that excitement level. I sold 29 units (across all books) on both days. The day after that my book went back up to $1.99 and I sold 18, then 19, and on the last day  of the promotion 24 books.

So, for me, those are awesome numbers. My average day is one or two sells. My best ever non-promotion day was like five (until today. I don't have any promotions going today and I've sold six. I like to think they are people who bought Dragon's Curse coming back to purchase the sequels.).

As I said, the Ereader News charges based on how many units you sold during their promotion. For $137 units, they charged me $11.87. Very reasonable considering.
I'm not sure how much  I got from the other sites I posted to.

So very positive experience over all.


Edit: apparently as of 8/5/14 Ereader News has changed some of their policies. They now charge a flat fee rather than a percentage. The fee depends on the genre, I'm guessing weighted by how many submissions they usually receive in that category. Romance is $25, for instance, and fantasy $15.
Also they no longer have a requirement for you to have 10 Amazon reviews. It now states
While we do not have a minimum number of reviews that are required, we do look at the reviews to get an idea of how well the book has been received by those that have read it.