Interview with Katharina Gerlach: Author of the Stepmother 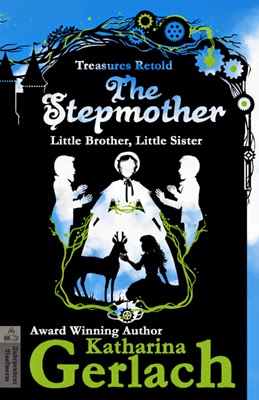 What can you tell me about your most recent project?
I'm currently writing a series of fairy tale retellings that are all set in the same world where magic and technology clash. This gives me the freedom to write stories that range from more traditional, magic based tales to steampunk stories. It's a lot of fun, and I get to revisit many of my favorite stories from my youth (be prepared for some rather obscure tales surfacing here and there)

I notice you have works available in German and English. Do you have a preference for which language you write in?
I write in English and translate it back into German. Way back, I did it the other way round and found that the English then sounds quite stilted. We Germans have strange ways of phrasing out sentences with a lot more wriggle room in sentence structure. There's a one page story by Kafka (a very famous German writer, long dead) which is written in a single, comprehensive sentence. That's something I call mastery of the language. ;-)

Does one language or the other lend better to certain sorts of stories?
Very rarely is there a story that refuses to be written in English, but it happens. In that case, I write it in German, sometimes not translating it at all, sometimes re-writing it in English at a later point. But as I saod, it's a very rare occasion.

What is your educational and professional background and how does that affect your writing?
I was born as the daughter of an extremely creative full time mother and a forester father. Does it surprise you that I am writing stories after studying forestry (ending that with a PhD in science)?
Even as a kid I found it annoying when I read fantasy stories with several suns or moons that never had anything to do with the storyline. I mean, even in our world with only one moon and one sun, there are countless cults that are tied to them. How much more so would it be if there really were more of either?
The more science I learned, the more knowledge I amassed about what's possible in the universe and what is not very likely (no one rules out anything completely at this point, after all we can't (yet) travel the universe to verify theories). In my stories, even the fantasy ones, I try to make the worlds believable. So if there are two moons or three suns, it has consequences in my worlds and complicates the lives of my characters (actually, I've only had two suns once, so far, and that was in Paralan's Children).

What inspires you? Do you have any tricks for dealing with writer's block?
Everything – the problem is to decide which interesting fact to read up upon and which to ignore. I can spend ages just amassing more semi-useless knowledge which might make great stories. A day only has 24 hours and most of those are taken up by my family, so I have to make the most of what little time remains. That#s also the reason why I just don't have writer's block. I'm too busy writing. If one project insists on being difficult, I'd write a couple hundred words and then turn to translating some other story, or writing a blog post, or creating a cover, or editing a first draft... There's always too much to do anyway. The only thing I make sure is that I write at least a little bit on the difficult story each day. I hardly ever abandon stories.

If you could enter into the worlds of your stories, would you do so?
Most definitely: YES! I'd love to get to know all the crazy creatures I dream up. Of course, I'd only go if I'm guaranteed to come back out alive. ;-)

Where can we find out more about your work?
The easiest way to keep up with my publishing schedule is by leaving your eMail address with me (you'll get a free eBook as a thank you). Or you can have a look at my amazon page or my homepage. I'm also on Facebook, Pinterest, and (occasionally) on Twitter.

About Katharina
Born and raised German with a generous helping of an adopted Scottish heritage, Katharina started writing at age seven (although she didn't get serious until much later) when the tomboy adventures she lived in her father's forest weren't enough for her imagination any more.
Writing about balloon people, flying hearts, giant spiders, and more was her lifeline to sanity and Real Life™ all through her education. After finishing with a PhD in science, marriage and the start of a beloved but distracting family, she returned to her life-long vocation.
These days, Katharina lives for stolen moments of writing happiness in two languages while juggling her husband, two girls in puberty, a fledgling daughter that just left the house, a dog, and … laundry.