Get Over It, Writers

Writers are people. People are funny. Funny and finicky. I spend a lot of time around writers who aren't yet published or are considering publishing, and a lot of them echo similar fears. What if my piece gets rejected? Or doesn't sell? Or people don't like it and leave mean reviews?

All understandable concerns when you are putting something on the open market after you poured so much of yourself into it.

However, occasionally, even with long term, several books in, published writers, I see a lot of pet concerns that just amuse me, from little things like, "People misspelling their name in reviews" to specific things they get sick of seeing in reviews . . . most of these things fall into the camp of "I don't like losing control of things."
I'm a chaotic personality which means, I don't remember the last time I felt I was completely in control, and I kind of like it that way. So that gives me a prime opportunity to MOCK YOU ALL!!! . . .er . . . playfully dissect worries that plague writers and inform you why they aren't particularly a big deal?
(Disclaimer: and a few of these may have plagued me at one point or another. I'm chaotic, but I do have my own little quirks. I'm just not going to identify which . . . also another I've never actually seen someone complain about, but I thought it would be funny, so I slipped it in. I'll let you guess which it is. . .but other than that, all of these are things I've seen voiced as major to minor concerns in author groups or discussions)

People reading your book an interpreting it wrongly.

I think this is what tempts a lot of writers to over explain. It could be as dramatic as a reader finding one character emotionally abusive towards another or as subtle as them missing a little bit of symbolism, but readers bring their own world views, perspectives, and thought processes into your book, and once they've got a hold of it, you can't get it back. Hence all the shipping going on in fandoms and how certain characters take off when they were intended to be the bad guy or a minor part.
Unless you literally tell your readers what to think about the book, they're going to get it "wrong" sometimes, but honestly, my favorite books are the ones that let me fill in the blanks with my imagination, so is this really a bad thing?
Conclusion: Get over it. (man, I'm snarky today) 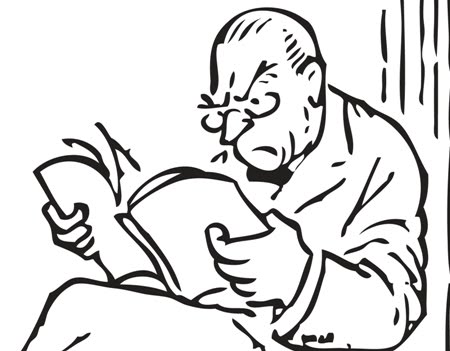 People not liking a character.

Yes, our characters are our babies. Yes, we even put a little of ourselves into them, but they aren't real. They aren't, I promise. I . . . what do you mean my character is needy? No she's not! She's just affectionate and devoted. No, that other character is not a brat, not too much anyway, just a little bit spoiled and . . .well, yeah, a brat, but in a nice way. Why don't you love her?
People are different and will react differently to different personalities. Also, similarly to item one on this list, they'll bring things into the reading and maybe your character reminds them of someone who once stole their favorite pencil in kindergarten. Out of your control.
Conclusion: Sorry, you'll have to either get over it or just never talk to people about your characters.

People reading in the bathroom.

Yes, your words are well crafted and high-minded but this is one of the places people read. And be honest, didn't you come up with 90% of your text in the shower anyway?
Conclusion: Get over it and then go read in the bathroom.

People doubting something you researched or witnessed could actually happen.

Yes, it's annoying. Readers think they know everything. They'll be quick to argue, "I've never known a person who could chew gum and walk at the same time! This character's ability are super human and unbelievable!" even though your Great-Aunt Martha was always chewing gum and walking at the same time. You even have video of her doing it.
Or maybe you researched something to death and found a really weird side effect to an actual drug . . . or a man who fell out of a jet plane and lived . . . or any number of strange but true facts that might be fun to work into a story.
Well, you know how they say truth is stranger than fiction? It often is. You just have to write it as convincingly as possible and resist the urge to hit someone over the head with your research. After all, it's fiction.
Conclusion: Roll your eyes at the person complaining about it, but still, get over it.

The thought of your book ending up for sale second hand.

I didn't realize this was a thing for so many writers until recently. but apparently it really bugs some writers to see used copies of their book either on Amazon or other sites. I guess they are the sort of reader who covets every book they own forever. My husband is sort of like that (though not a writer). Every year I make a box of books to donate to Operation Paperback and I'm like, "Can I have some of these books you haven't read in five years." And he's like, "No! My books!"
But space concerns alone mean that most readers aren't like this and many like to make a little money reselling books after they've read them.
Also, another complaint is, "But I signed it for them and personalized it." To me this really only works if the reader has some sort of emotional connection to you, though. If they won your book in a giveaway and never read you before, they probably don't. Now if your mother is reselling all the 'dear Mom' copies you gave her, it might be time to have a heart to heart.
Another way to look at it: once that reader has read the book, they put it on the shelf, and it sits there and does nothing for you. The reader sends the book back out into the world, whether by donating it to their library or thrift store or selling it on ebay (extra special author signed addition, $400!!!), and they've given your book feet. It is now out and about being your ambassador, a tiny paperback billboard that says everywhere it goes, "Hey look, this person wrote a book!"
Remember, ebay and thrift stores are a better alternative than the dumpster. If you ever see your book in the dumpster, don't get over it! Climb in and rescue the poor baby because dumpster books are just a waste.
Conclusion: Your book being resold is actually a good thing. Super quickly get over it.

This one could have a post all to itself. It happens. Your book is not everyone's taste. Sometimes, kind of like in the instance where you did your research but people still doubt your gum chewing grandma is possible, it will be unmerited. They'll maybe accuse you of not researching something you did because your conclusions on how to portray something fell outside their personal experience. Or they'll make assumptions about your personality. And yes, troll reviewers who say mean things just to be mean exist, but you know what? They do it to evoke a reaction. If you give in, they win. If you respond they especially win.
And in this case getting over it doesn't mean you don't have a right to be annoyed or even saddened, especially if something fairly nasty is said, but for your own good, you still should get over it, move on, look the other way, because otherwise, you'll go nuts.
Conclusion: Sorry, but you still have to get over it. Maybe have some chocolate?

Do you have any thing that has been a hang up for you in the writing world? Think I'm a little too snarky and need to drink less coffee?
Let me know in the comments below!