Now if you've clicked around here before, you may have seen this post where I attribute my best ever sales day to an ad on eReader News Today. I've tried a couple of times to repeat that success, but they don't like to run the same book too close together, and sequels I listed got me a jump in sales, but not the massive one I hoped.
So I've started experimenting with other promotion routes and thought I'd talk about what worked and what didn't and why. Both of these new sites I have used twice now, once for free days and once for discount days.

Since I released Beggar Magic, sales have been okay, but without a related sequel or prequel, it did not give me the boost I'd hoped for and seen with releases in my Dragon series. So I decided to dip into advertising again. Since eReader News had worked for me in the past I started with that, putting Beggar Magic at 99 cents for a few days following Christmas. I also planned a free day for Dragon's Curse, but was unable to get it accepted onto ENT for that.

So unable to get onto ENT for Dragon's Curse I tried two other reasonably priced promotion sites, bknights out of fiverr and the Choosy Bookworm. I jumped on Choosy Bookworm because I wanted to schedule it before they did a price increase, I forget what the price used to be for a guaranteed feature, but it is now $20 and it was slightly less .  . . anyway, that site does a one time email feature and then has you listed on their feature page for a week, which is a good amount of time for that price of ad. I'll talk about results and their reach in a bit.

Now, when you are running a "free day" that green line representing free downloads jumps WAY up and makes it hard to see the little red and blue lines of books you are actually getting paid for, so I did two graphics, one showing the green line and the other without it.

Let's start with the green line. 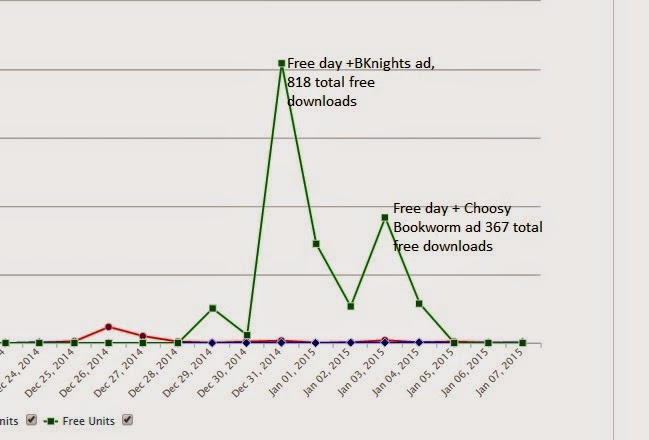 Let's talk about basic downloads.
BKnights is EXCELLENT for promoting free download days. I used them to promote a 99 cents sale and got a tiny jump in sales, but nothing worth writing home about, but for a free day, considering their ads are only $5, they really came through. The day they featured my book, I had over 800 free downloads.
A few days later my book ran on Choosy Bookworm. Their current fee for featured books is $20 so a decent amount more than BKnights but still in the "reasonable" realm. I also had used them for a 99 cents sale in November, and similarly to BKnights saw a small jump but not enough that I made the money back from the ad. They don't seem to work for 99 cents sales. That said, they do keep your book on their website for a week, which is a decent length of time. When I promoted my free day with them, free downloads, which had dropped down to just over a hundred the day before, shot back up to 367.
So both sites work to promote free days. BKnights obviously works better and costs less, but it doesn't hurt to do both, especially if you space them a few days apart like I did. 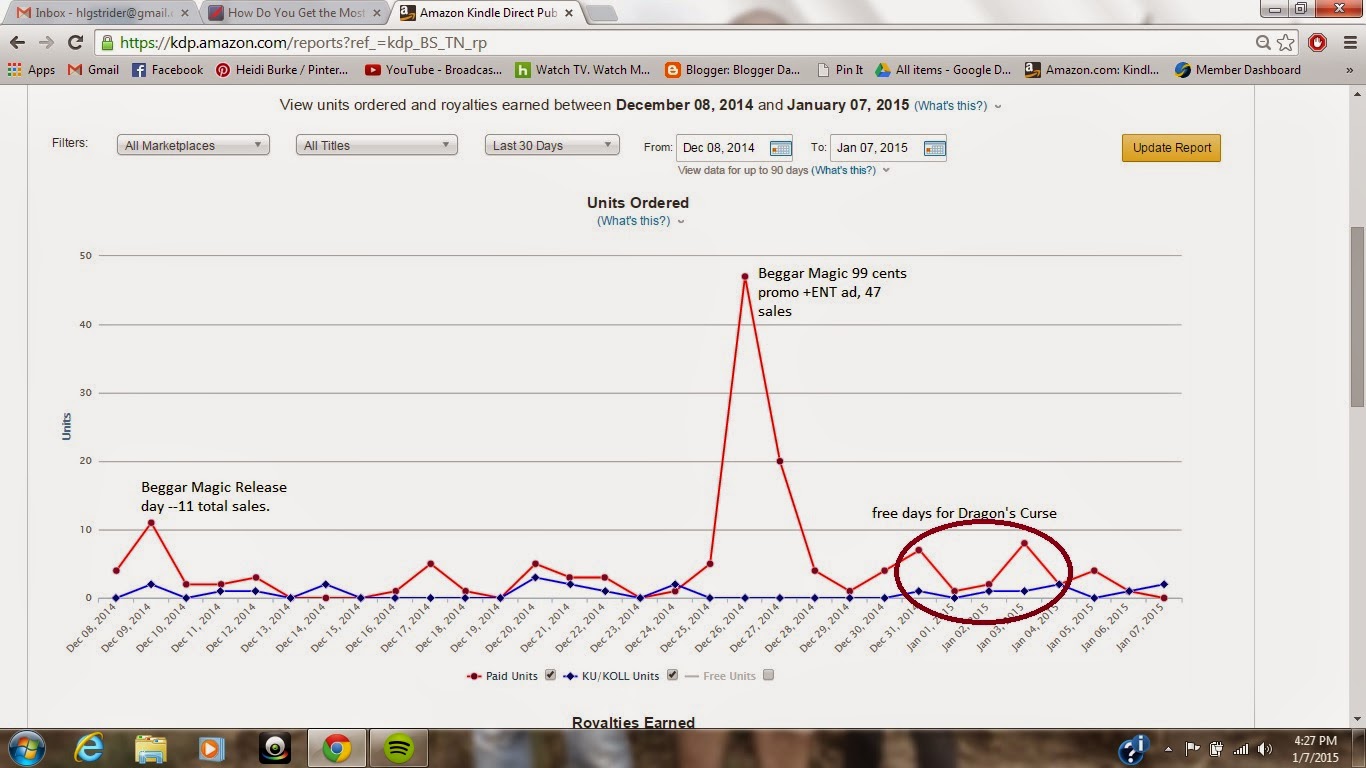 Now the main reason to do free days is to encourage people to buy your non-free books, so let's take a look at sales. I'll start with the release of Beggar Magic  with the semi-disappointing sales I was talking about to give you an idea of average vs promotion.
For release day, I did about 11 sales of Beggar Magic, and sales were pretty steady all through December (which I'm told is usually not a great month for ebook sales, with people more focused on gifts and whatnot. Ebooks are hard to wrap). I had a few good days but most days were a book or two sold.
So back to Ereader News Today. Again, probably because of December (I ran the ad the day after Christmas), I had less sales than I did during my Dragon's Curse promotion, but 47 sales in one day is nothing to scoff at.
My free days for Dragon's Curse launched December 31st, and I definitely saw a ripple through my sales as far as sequels go. On average, sales have been up and the best seller has definitely been book two, the book right behind the free day book.
So it worked. I think I've probably about made back what I spent in advertising. The question is, will sales continue. Will those who picked up Dragon's Curse for free read it and come back for Dragon's Debt and the rest of the series? I hope so. There has been enough of an uptick that I'm optimistic.

But anyway, three sites, three results. Hope this is helpful for you if you are planning to market some books.
Does anyone here have a marketing plan they want to talk about?
Labels: bknights choosy bookworm ereader news today marketing promotion self publishing