Here's another of my posts on advertising venues. As always, this is just my personal experience as I stumble around the web trying new and exciting ways to sell books.

Now with Fussy Librarian, I've had friends who have done pretty well on it. However, I don't think those friends write fantasy, and personally, it isn't the best "promo site" I have used. It is one of the cheaper ones. Their pricing differs depending on the genre you are promoting. Fantasy is one of the cheaper categories--$8 an ad, you can view their pricing guide here--but if you look at their subscription list there is a reason for it (check that out here) . . . but since it was only $8, the amount of sales I'd need to make that back weren't much.

So if your genre is not fantasy, take these numbers with a grain of salt. 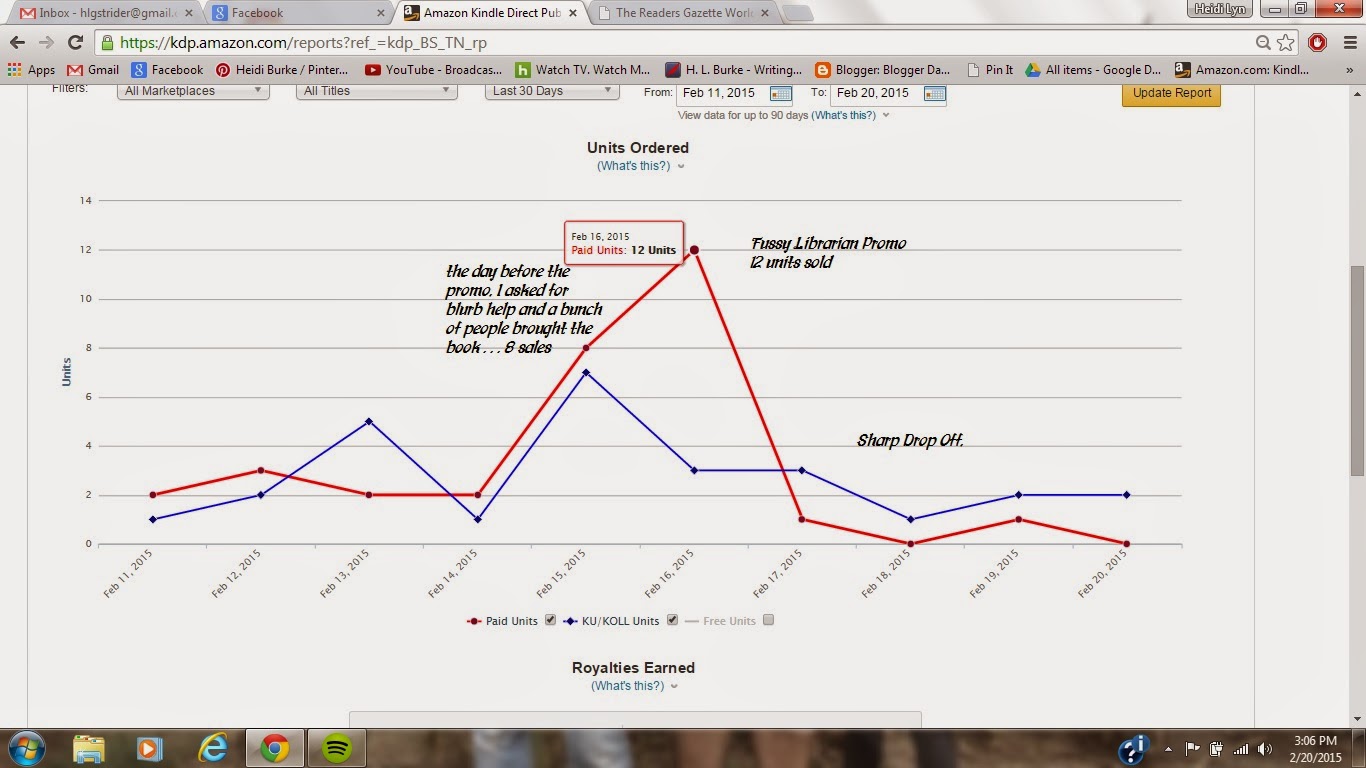 I only sold 12 copies on the promo day. Now that's great sales for a non-promo day, but if you'll notice, I sold 8 copies the day before, without any promo. My average day runs around 4 copies sold across my books.

I think the day before the promo was higher because I asked a question about marketing my book in a facebook group, someone asked me to link it so they could read the blurb, and at least one person said they picked up the book from there. I'm guessing more than one did because the marketing discussion had a lot of participants, so I found some buyers that way, which is not something I did intentionally, I swear! I really was there to ask a real question and only linked the book because they asked (if you go around linking your book in random facebook discussions, you'll probably just annoy people, not make sales.)

A couple of other ways I judge whether a promo has worked: did any of the buyers return the book, meaning the bought it impulsively, immediately regretted it, and put it back? In this case, no returns, but with only 12 purchases, that's not a big surprise.

Did sequels get a boost after the promo? Also no. Sales have actually been down since I ran the promo.

So for a writer of fantasy, I'd say Fussy Librarian works about as well as casually mentioning you are a writer in general conversation. Not that much better.
Labels: fussy librarian price promo reasonable advertising results sales