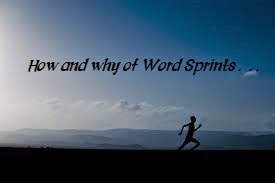 I've been having trouble staying focused, so I decided to try something new: Word Sprints.


Now Word Sprints are usually a NaNoWriMo thing and also usually a competitive social thing. I don't do social writing. It's not because I'm introverted. I usually test "ENFP" in the Briggs Myers what not. However (cue psycho babble):

"Unlike other Extraverted types, ENFPs need time alone to center themselves, and make sure they are moving in a direction which is in sync with their values. " (source)
In other words, I like people but prefer to work alone.

However, the idea of focusing on just getting as many words on paper as possible in a short time seemed like a good idea, especially since I'd go a few words, check facebook, look up a synonym on dictionary.com or fiddle with my music.

I thought I'd post my results from a series of them I did yesterday afternoon.

I tried another set of them later that evening for a total of 1260 words in 40 minutes. Still only an average of 150 or so words per five minute sprint, but it definitely adds up. 2000 words a day is nothing to sniff at.
Some advantages. Racing the clock means you don't procrastinate. If you really really want to look something up, you wait until that five minutes is over. Stops me from the "Dang, this music isn't very inspiring."
And I did take quick breaks between sprints to do little things like pull up my email.
I'm thinking about expanding my sprints to ten minutes. It's more about increasing discipline (do NOTHING but write for five minutes, then ten, then . . .who knows?) than writing quickly.