Lands of Ash: Chapter One Tease 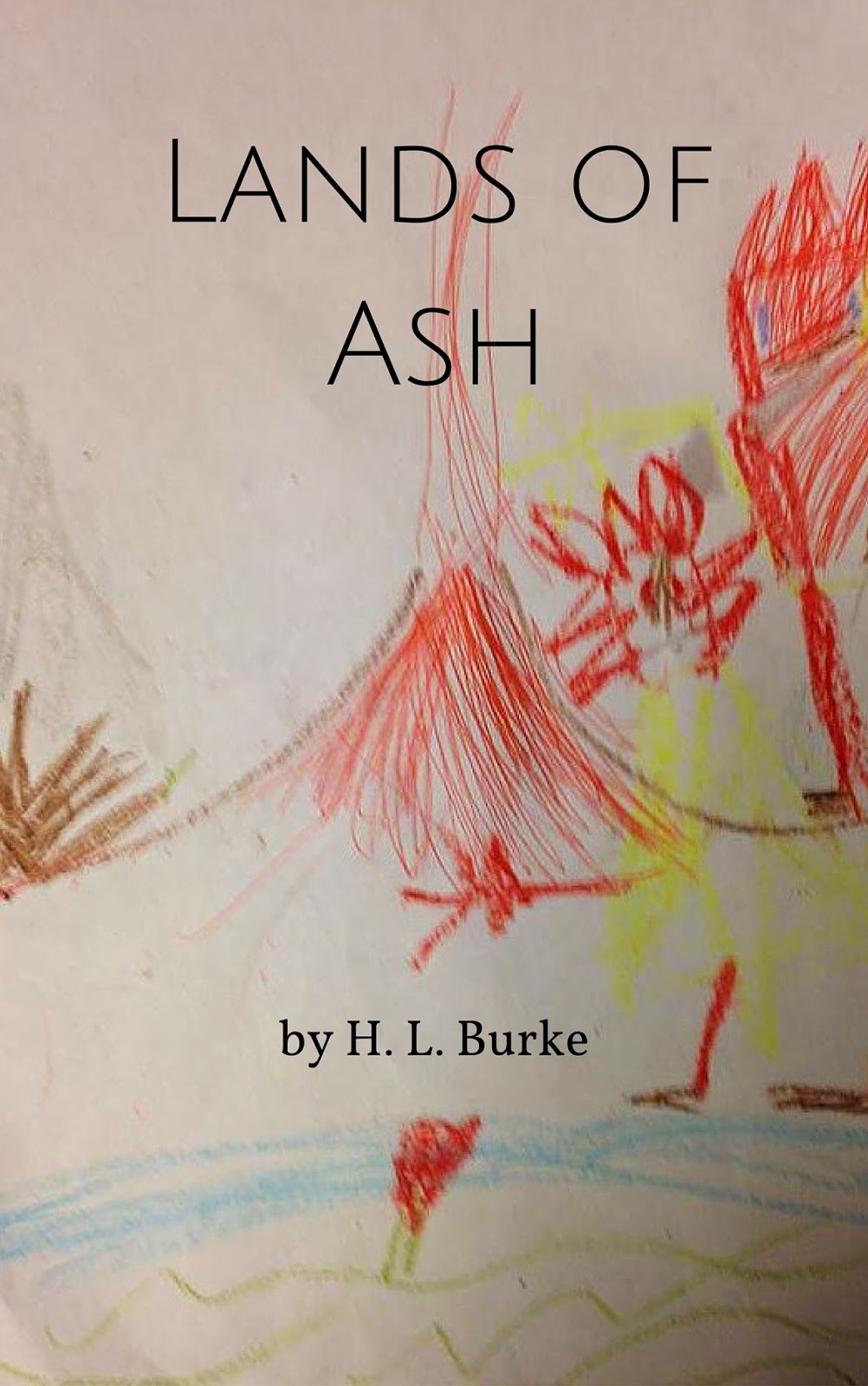 First off, no, that's not my cover art. Not really. It's the cover art my daughter made for me, but it seemed appropriate as I haven't done my official cover reveal yet (stay tuned for that). Anyway, it's time to tease my first chapter! This book is due out June 18th, so keep your eyes open for more updates and maybe even a chance to win a copy!

This is my first chapter. It hasn't been proofed or edited yet, but this is basically what you're going to get when you read my book in a few months (you know you want to!).


Chapter One
The Burnt Ring

Ketyl tightened his grip on the pack-ram's leather bridle. The large beast rubbed its head against its owner’s shoulder, and he patted its curled horns and clicked his tongue.

“I’ll be right back.” He looped the reins around a low branch. The ram would stay until he returned . . . though if he didn’t return, it would at least have the opportunity to free itself rather than starve. Not returning was always a possibility.

He took a few steps from the musky smell of the ram’s gray wool, into a shaft of sunlight falling between the tall pines. He inhaled.

It overpowered the fresh scent of the growing trees and the chill of the morning air.

“Too close,” he muttered. “They’ve never come this close before.”

He was less than two days’ slow ride from the Haven and a good three days' walk into the Mountains’ Feet, the great forests between the Valley and the impassible Sky Finger mountain range.

For a moment he allowed himself to hope it was only a passing traveler or a refugee with a campfire, not the Elementals. However, he knew the sulfurous taint of their destruction all too well. He checked his quiver: twenty arrows, all icestone tipped. That wouldn’t be enough against an invasion, but he could easily take down a scouting group. The trick was to do so before they realized they were being stalked.

Ketyl wore sturdy trousers, a long-sleeved shirt of flame-resistant brown canvas, and a leather jerkin almost the same color as his olive skin. He'd stained his face and hands with green leaves and kept his hair close cropped, so there’d be less to burn if a spark settled on his head.

He crept from tree to tree. A bird sang in the distance, and another answered. The tight muscles between his shoulders eased. If the Elementals were close, the animals would have fled. Still he proceeded with caution, ears attentive to the slightest sound.

Pine needles crackled underfoot. The dry months were drawing to a close. Soon the rains and ice would bar the fire folk from their world.

Flames flickered through the trees and licked along the branches. Not a large force then. Maybe some Charred or a solitary Flare, but not more than that, or the fires would be stronger. Or perhaps they had already gone.

Hopeful but with his eyes wide open, he drew his bow. Whatever awaited him, he’d be ready. He took a forest-green bandanna from his pocket, dampened it with a splash of water from his canteen, and tied it over his mouth. The lower branches smoldered, but he ducked under them and stepped into a perfect circle of blackened earth. He touched the ground. It was cold, but the signs were clear. A portal had opened here.
The Elementals wouldn’t risk staying in the area with their escape route gone. A sudden rainstorm or even a heavy fog could extinguish their fire, and they’d have nowhere to shelter.
Ketyl took a map from his pack and examined it, marking this new entry point with a charred stick. This was the third in less than two days. If he added in the rumored sightings from earlier that week, it brought the total to six. They weren’t staying long. If it hadn’t been for the black circles left by openings to the Fire Realm, no one would’ve been aware of them at all. Scouting parties then? But why so many and why here, so far from human settlements?

He pulled the bandanna from his mouth and traced his finger from one sighting to the next. They formed a definite line. He continued across the map along that trajectory and froze when his finger touched Fork Vale Fortress.

It couldn’t be. They couldn’t know about that. They always kept to the edges of the valley, not the forests, and definitely not the Fortress.

Ketyl swallowed. There were many human settlements scattered about the Mountains’ Feet and along the sea coast, but the Fortress was the largest, home to almost a thousand refugees and a garrison of men at arms. It was the survivors’ last stronghold.

He couldn’t reach it in time, but if he could get to the Haven, he could send a warning by carrier pigeon. He shoved the unfolded map back into his satchel.

Ketyl strode the perimeter of the portal scar. Other than full-on raids, there were two reasons the Elementals entered this realm: to scout in preparation for raids and to gather fuel. Since there were no settlements nearby, this couldn’t have been a scouting mission. They must’ve been gathering fuel. Two trails of burned branches and charred grass led away from the scar. If he could see how much they had gathered, he could get an approximate idea of their numbers. The smaller Elementals didn’t need much more than oxygen. The big ones, however, craved wood as a man might red meat.

Smoke wafted through the trees, causing his eyes to water and sting. He replaced the bandanna and nocked an arrow. Gray wisps surrounded him as he crested the hill.

The blackened, skeletal remains of a forest stretched before him, almost to the top of the next hill. Heat rose off of the trees, but the ground was cold. Only a few hot spots remained. He leaned against the singed pine at the edge of the burnout and heaved a sigh. A large party then. Flares at least, if not an Inferno lord. He needed to get back to the Haven and send that message.

A twig cracked, and Ketyl froze. The sound came again, from behind him. Whirling about, arrow ready, he squinted through the haze. Flashes of hot red, like dying coals, moved low to the ground. A Charred.
The Charred resembled a blackened corpse, its skin great flakes of ash and charcoal. Fire glowed through the cracks in its skin, and it crawled along the ground. Its belly scraped the grass like a lizard’s, leaving a scorched trail behind it.

The Charred’s lazy pace was deceptive. In battle they could charge like a ram. One shot could kill it–they were by far the weakest of the Elemental beings–but Ketyl knew better than to underestimate his foe. Unfortunately, for a clear shot, he’d have to leave his cover.

He darted out. The Charred’s head snapped up, its chest and neck elevating, and its eyes, two points of red in a formless face, flared. Ketyl’s arrow sang from the bow, impacting against the Charred’s shoulder, not the instantly fatal headshot he’d intended. Ketyl cursed.

The icestone arrowhead radiated waves of blue light from the wound. The veins touched the Charred’s shoulder, and its arm broke from its body, shattering upon the forest floor. Lurching to its feet, the Charred gave a cry like roaring flames and stampeded towards Ketyl.

The Elemental was on him before he could draw another arrow. He fumbled for his knife as the Charred grabbed at his pant leg. Ketyl kicked out, sending sparks and ash flying from the Charred. The blue veins pulsed up the monster’s neck, towards its head.

He drew his knife, not icestone, just good, sturdy steel, and slashed through the weakened neck. The head rolled away, dissipating like mist. Its body crumbled into ash before him. Managing to calm his nerves, he reclaimed the arrow from the disintegrated Charred. Icestone was too precious to waste.

Ketyl glanced about the clearing, but saw no signs of other Elementals. The Charred were expendable to them, mindless grunts acting upon instincts and orders. This one must’ve been left behind.

How many of them are there? I've never seen a fuel burn this big outside the Burnt Lands. He shuddered, remembering that forsaken place with its blackened earth and tree-less hills.

He rushed to his pack-ram. The animal looked up at him as he unbound it. “Sorry, boy, but you’re not bred for speed. I can get there quicker on foot.” He took a single sack filled with provisions and extra arrowheads from the creature’s back. “I hope you find your way home, but if not, these woods will suit you.”

The ram bleated as Ketyl relieved him of his load and saddle. With the ram in tow, the journey would take two days. If he walked non-stop, Ketyl hoped to make it in one. The Fortress needed to be warned.

Most of the gear would be left behind. Ketyl gathered only the essentials. He hung the rest of the bags from a limb. Perhaps another traveler would find and use them, but if not, at least they wouldn’t burden his pack-ram any longer.

Ash still clung to his clothes from his encounter with the Charred, and he stank of sulfur. Well, the fresh air of a quick walk would fix that.