The Collar and the Cavvarach: Excerpt!!!

Today I'm happy to host Annie Douglass Lima and her blog tour for her next YA Action and Adventure book. Take it away, Annie!


I'm excited to announce that my young adult action and adventure novel, The Collar and the Cavvarach, is scheduled to be released next month!  Here is the cover, created by the talented Jack Lin: 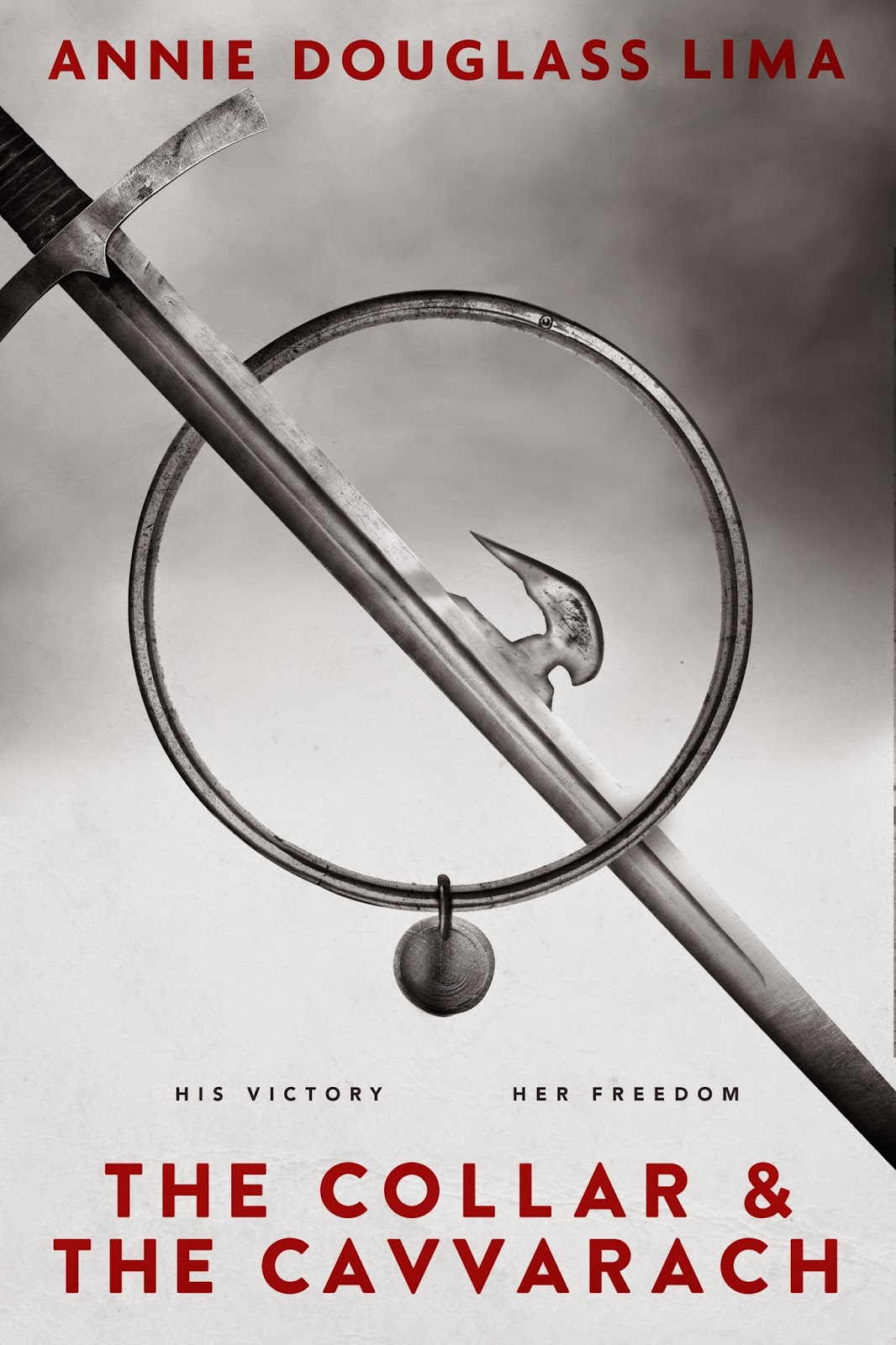 Bensin, a teenage slave and martial artist, is desperate to see his little sister freed. But only victory in the Krillonian Empire's most prestigious tournament will allow him to secretly arrange for Ellie's escape. Dangerous people are closing in on her, however, and Bensin is running out of time.  With his one hope fading quickly away, how can Bensin save Ellie from a life of slavery and abuse?


What is the Collar for, and What is a Cavvarach?

The story is set in a world very much like our own, with just a few major differences.  One is that slavery is legal there.  Slaves must wear metal collars that lock around their neck, making their enslaved status obvious to everyone.  Any slave attempting to escape faces the dilemma of how and where to illegally get their collar removed (a crime punishable by enslavement for the remover).

Another difference is the popularity of a martial art called cavvara shil.  It is fought with a cavvarach, an unsharpened weapon similar to a sword but with a steel hook protruding from partway down its top edge.  Competitors can strike at each other with their feet as well as with the blades.  You win in one of two ways: disarming your opponent (hooking or knocking their cavvarach out of their hands) or pinning their shoulders to the mat for five seconds.

Bensin took a deep breath. “I’m the one who called awhile ago to ask for directions, sir. Bruno sent me to ask for work.”
“Did he?” Wenn picked up a Styrofoam cup from the ground nearby and rose to his feet. He worked a wad of betel nut out from one cheek and spat it into the cup. “Well, do you know anything about engines?”
“Um — not really, sir.” Was it a legitimate question? Did the man expect him to actually do a job for him? Or was he just being careful about what he said in front of his coworker?
“Well, you can wash this other car for us.” Wenn indicated one of the two they weren’t working on. “Its owner is coming back for it pretty soon. Supplies are in that cupboard; faucet’s out front to your left. Make sure you dry it and give it a good wax when you’re done.” He set the cup down again and disappeared back under the car.
Maybe he’s waiting to talk to me when the other guy leaves. Bensin found the supplies where indicated and started in. He hoped this wouldn’t take too long; considering the length of the bus ride, he ought to be starting back pretty soon.
Eventually both men finished their tasks. Wenn propped open the hood of the other car and began to fiddle around under it, and the second man hung his tools up on the wall and disappeared through a doorway.
This is my chance. Bensin set down the sponge he had been using and approached Wenn again. “Sir,” he began, raising his voice above the blasting music, “the reason I actually came —”
“Shut up!” The man glared at him. Then he beckoned and pointed to something under the hood.
Uncertainly, Bensin stepped closer and bent to see what Wenn was pointing at. He didn’t know much about car parts, but he saw nothing that seemed out of the ordinary.
Wenn seized him by the collar and tugged his head in there above the engine, leaning in himself until their faces were only inches apart.
“We can’t talk here!” His voice was almost inaudible under the music. Bensin, clutching the edge of the engine compartment, stared at him in the gasoline-fumed shadows. “Didn’t you see the cameras?” the man demanded.
“Cameras, sir?”
“The video cameras installed up in the corners by the ceiling. No, don’t look now! They don’t pick up audio, but someone could read our lips.” At Bensin’s blank expression, he went on. “We have to have a special license because we keep tools like bolt cutters here that could be used for — you know — less than legal purposes.” He gave the collar a meaningful twitch. “So the government keeps an eye on us through the cameras, or at least they could be watching at any given moment. They ever suspect I use my tools to cut something I’m not supposed to and they take over the business just like that; and everyone who works here ends up on the auction block.” He released the collar. “So shut up. Be patient.”
Bensin nodded. Rubbing the back of his neck where the steel had dug in, he straightened up and went back to work on the waxing.
Wenn’s partner came in and out a few times, puttering around, and a third man appeared and joined Wenn working under the hood. Bensin wondered how long it would be until they left and where Wenn was planning to bring him to talk to him. He wished he could see a clock; it must be past time for him to head back. What am I supposed to tell Coach Steene if I’m late?

Click here to preorder The Collar and the Cavvarach from Amazon.

Connect with the Author Online:

Labels: excerpt; YA the collar and the cavvarach; novel