I like this cat. Obviously, he knows he is right and the other individual is wrong, but he's calm and collected. Still going to point out how illogical and wrong the other person is being, but in a Spock sort of way, I think. Nice and calm with bullet points.

But yeah, I like to debate things, sometimes just for the fun of it, but I seek out debates less and less because they take time and energy and eat up a lot of both.
Still, even though I don't go looking for internet fights any more, sometimes they come to me.

Case and point, recently in a writers' Facebook group, I made an offhand remark that to me writing was more important than story. My point was that writing draws me in and keeps me interested and most stories have a chart-able, predictable story arc, and I often know how they will end when I start them. Someone in the group seemed to take offense to this and told me no, writing doesn't matter. Story is everything!
I waxed poetic for a few posts about how word choices and new ways to express ideas were what excited me about any given story . . .
And they shot back that "Rules don't matter to creativity. Grammar and punctuation aren't important."

A lot of writing is artistic choices where there is neither a right nor wrong. There are some cool guidelines you can use to polish it up, make it easier to read, make it work better for you, but none of them are what I consider to be hard and fast rules that apply in every situation (sentence) you might ever need to write.

Grammar, however, is all about hard and fast rules. Punctuation, too, to an extent. (though that has more wiggle room. There might be multiple ways to punctuate the same sentence which would change the flow of it--how long the reader pauses at a comma vs a semicolon or dash--but where both versions have essentially the same meaning . . . I actually find punctuation to be pretty artistic. I get all geeky trying to choose between a full stop and a semicolon or an m-dash vs. an ellipse.).

But to totally disregard both grammar and punctuation as "unimportant" and unnecessarily nitpicky . . . seriously, I about had a stroke.  Well, not literally. Obviously. It was a metaphorical/figurative stroke where my brain stopped working for a moment while I goggled at the screen and wondered, "Is this person for real? Does . . . not . . . compute . . ." 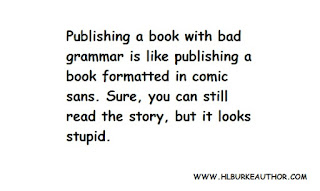 I got a little snarky at this point and told her, "Publishing a book with bad grammar is like publishing a book formatted in comic sans. Sure, you can still read the story, but it looks stupid."
(I since had someone jump to Comic Sans defense. I just used it as an example because it is the font you see listed as a "don't" when regarding resumes, professional writing, business letters, and I don't think it is a stretch to say it does not belong in manuscript formatting for the most part. I have since also found that Comic Sans is slightly easier to read if you are Dyslexic, so obviously, it does have a purpose and a place, but I still assert that this place is not in novels. An interesting comic sans infographic here.)

Lists are good, so here are some bullet points as to why grammar and punctuation matter when you are writing (and I'm not talking first drafts. First drafts are meant to be fixed later. I'm talking finished, published drafts you expect people to read and pay for.):

And because I've been a little ranty in this discussion, I'll leave you with this.

By the way, everybody makes grammar, spelling, and punctuation mistakes. Even professionally proofread books are going to go to print with an error or two. I find them all the time in great books. I don't judge a writer or a book for having a few scattered errors. However, that isn't to say grammar doesn't matter. If your book/blog post/whatever is error ridden, consider FIXING it. Don't get huffy when you get reviews complaining that your book is hard to read because of basic mistakes.
Labels: art grammar proofreading publishing spelling word crimes writing