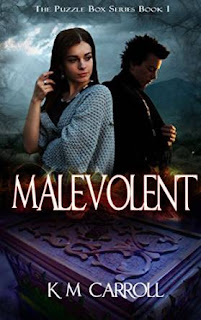 Libby is a high school senior who should be preparing for graduation. Instead, she's been bedridden for six months with valley fever, stuck on her father's farm in California's central valley.
When the beekeepers arrive in February, bringing their bees to pollinate the almond crop, one of them looks like a vampire, acts like a vampire, says his name is Malevolent, and tries to murder Libby's lousy boyfriend. Yet he offers her honey that dramatically improves her illness, and his bees sing words that she can understand.
Mal took up beekeeping in order to preserve the last remnants of his humanity. What started as a simple trip to California quickly turns into something far more complicated, as he meets a lovely girl who is deathly ill, infected by Mal's own brother. Feeling guilty and responsible, Mal sets out to heal her with his precious, magic-infused honey, and with each passing day, comes closer to breaking his personal creed:
Befriend Many, Serve Some, Trust Few, Love None.
Once healed, Libby has the strength to break up with her boyfriend--touching off a war between Mal and his brother. This escalates into a realm of awful magic Libby has never dreamed of, where she is both pawn and prize in the battle against a Necromancer. In the end, Libby must face her growing feelings for Mal, and decide whether to destroy him--or rescue him from his soulless existence.

It's going to be really hard to review this without making bad bee jokes. . .

This honey of a book is truly buzzworthy! You'll bee amazed!
Okay, got that out of my system. . .This story manages to take elements I've never seen in a paranormal romance before and use them in wonderful ways. It also takes some staples and uses them in new ways. Puzzle boxes become creepy and bees become awesome.
The magic system is new and stays consistent and interesting, and the characters are never so stupid you wonder, "How are they not dead yet?" which is often a problem with heroines in this genre. Well written with likeable characters who ask all the right questions but still face a foe strong enough that you are seriously worried for them.

YA Safe (couple of mild swear words, some violence but not graphic, no sexual content)