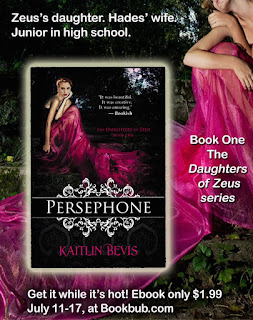 If you want to know a culture’s fears, study their stories. Fears resonate. They keep us talking, keep us telling the story, because as long as it’s a story, it’s happening to someone else. There’s a reason the Persephone myth is one of the five major myths taught to school children everywhere. There’s a reason echoes of this myth keep popping up in modern culture, sometimes as overtly as my retellings, and other times as subtle as Beauty and the Beast. We tell the same story over and over and over again because it scares us. Something about that myth leaves people feeling unsettled. There’s a wrongness to it that demands to be fixed. So throughout time, we’ve told it again and again, hoping that maybe this time, we’d get it right.

What is it about the Persephone myth that resonates so much with us? On its surface, the answer is simple. Persephone is, at its heart, the story of a mother searching for her daughter. As a mother, I can literally not even imagine the depths of the fear of not knowing where my daughter is, or worse, knowing exactly what horrible place she’s been taken to, but not being able to save her. There is nothing I wouldn’t do to keep her save, and god help anyone who gets in my way.

But there’s more than that. There has to be, because as a mom, I get the universal fear behind the myth, but I was fascinated with it long before I became a mother. The most common audience for the Persephone myth aren’t parents, but children. Specifically children on the cusp of adulthood. Teenagers. And I know why.

The myth is incomplete. In the original telling, we know all about Demeter’s fears and motives. We trace her steps through history as she scours the globe looking for her daughter. We glimpse the politics of Olympus enough to understand Zeus’ motives for allowing Hades to take Persephone and the drastic events that had to take place before he relented and returned the missing girl. We’re there for Hades catching a glimpse of Persephone for the first time, and we get his rationale and his motives for why he took her. We even get motives from nymphs and primordial deities with such minor roles that they get written out of most versions of the myth. Literally the only voice missing from the Persephone myth is Persephone’s.

Persephone was silenced, but the impact of her abduction is apparent. Her mythology begins with her as an innocent, carefree, happy girl picking flowers and ends with her role as the Iron Queen, a major force to be reckoned with mythologically speaking. Her name even changes. She has the ultimate coming of age story and she doesn’t even get to tell it.

We’re not just afraid of losing our children, we’re afraid of losing our selves and our voices. And that fear repeats itself over and over and over again in Greek mythology. Ovid wrote an entire book about transformation in Greek mythology. Cassandra gained an awesome power, only to lose her voice and go insane. We pay the ferryman two coins to take us across the river because the potential of being thrown in Tartarus is less frightening than the thought of being stuck on the wrong side of the river, alone and ignored. Orpheus was featured just as prominently in Greek mythology as Hercules and literally the only superpower he had was the ability to make people listen.

I wanted to tell Persephone’s story. I wanted to get into her head and understand her transformation into the Iron Queen. I changed details here and there and I modernized the story, but I did my best to stay true to the spirit of the myth. One of the ways I did that was through the book titles. In the myth, Persephone was defined by her titles.
Book one, Persephone, is about her transformation from an ordinary girl named Kora, to Persephone, the Queen of the Underworld. It’s the story of her abduction. Her time in the Underworld changes her, but her story doesn’t end there.

I called the second one Daughter of the Earth and Sky because in the myth, Persephone’s value was placed in her role to other people. She was Demeter’s daughter, Zeus’ daughter and pawn, and Hades’ wife. The second book in the trilogy is all about Persephone trying, and failing, to balance all of her roles and the expectations that come with them without losing herself in the process. She starts the book clinging to the remnants of her old life and trying to make them fit into what she thinks her new life should be. She’s so afraid of who she might be becoming that she loses sight of who she is.

In the myths, it wasn’t until she came into her own as The Iron Queen that Persephone was referred to as a person in her own right instead of an object. Book three Persephone is a force to be reckoned with. Writing that, reaching that point with her character, was an incredibly awarding experience that settled the sense of wrongness hearing the myth had left me with. I can only hope reading it does the same thing.


The Daughters of Zeus, Book One

One day Persephone is an ordinary high school senior working at her mom's flower shop in Athens, Georgia. The next she's fighting off Boreas, the brutal god of winter, and learning that she's a bonafide goddess--a rare daughter of the now-dead Zeus. Her goddess mom whisks her off to the Underworld to hide until spring.

There she finds herself under the protection of handsome Hades, the god of the dead, and she's automatically married to him. It's the only way he can keep her safe. Older, wiser, and far more powerful than she, Hades isn't interested in becoming her lover, at least not anytime soon. But every time he rescues her from another of Boreas' schemes, they fall in love a little more. Will Hades ever admit his feelings for her?

Can she escape the grasp of the god of winter's minions? The Underworld is a very nice place, but is it worth giving up her life in the realm of the living? Her goddess powers are developing some serious, kick-butt potential. She's going to fight back.

Chapter I
“Persephone . . . ”
I hunched over, doing my best to ignore the sound of my name being whispered on the wind. It curled around me in a sensuous breeze. Once I would have turned around, tried to find whoever said my name. Now I knew better. There was no one there. There was never anyone there.
Too bad I hadn’t figured that out before the whole school began to think that I was crazy.
“Persephone . . . ”
I was starting to think they were right. I could feel someone watching me. Their eyes bored a hole in the back of my neck and crawled over my skin. The hushed sounds of my classmates did little to make me feel safe. Fabric swished as they shifted and moved. Nails scratched skin, lips smacked, and someone breathed too loudly. Above it all Professor Homer spoke with quiet excitement. Rare in teachers, but he was still new.
Something brushed against my spine and I twisted around, heart in my throat, only to see the innocent branches of the bushes swaying in the wind.
“Is everything all right, Kora?” Professor Homer’s glasses glinted in the sun. He shielded his eyes with his hand, brown eyes crinkling in concern.
“Sorry.” I shifted away from the bush and faced Professor Homer. He waited for Rachel and the twins, Jessica and Ashley, to stop giggling before continuing the story.
I ducked my head to ignore their laughs and whispers. The air around me stiffened, ice cold. No one else noticed. My breathing slowed, and I forced myself to stay rooted to the ground, as solid and unmoving as the gray trunk of the oak tree in front of me. It took every fiber of my being not to squeeze my eyes shut.
Please don’t see me.
The thought was as illogical as a deer praying not to be spotted by a hunter. I was already in the hunter’s sights.
“Are you okay?”
I jumped at the sound of Melissa’s whisper; her hazel eyes remained riveted to Professor Homer to fool him into believing she was paying attention. He narrowed his eyes in her direction, not missing a beat in the story he was telling the class.
It’s not real, I reminded myself, and latched on to the distraction she provided. I gave Professor Homer an innocent smile, touching my thumb to my chest to sign I was fine to Melissa. We’d learned American Sign Language years ago to share secrets, but ASL wasn’t often discreet. To learn another “secret” language, we’d signed up for Latin.
It hadn’t taken long to realize vocabulary wasn’t the focus of Latin class. No, we had to learn about declensions, cases, conjugations, and sentence structures. No wonder the language was dead.
Professor Homer tried to keep it interesting by mixing in classical education and mythology. Since tomorrow was the start of winter break, and two-thirds of our classmates were taking make up exams, we were taking what he called a “mental health day.” He leaned against the trunk of the oak tree, brown loafers peeking out from beneath the cuffs of his tailored pants. A yellow legal pad full of scrawled notes was propped haphazardly against the tree trunk.
A shift in his tone caught my attention. He rolled up the sleeves of his blue dress shirt, moving his hands as he told the story. He leaned forward, voice becoming ominous.
“Oreithyia danced upon the river bank, unaware she was being watched.”
A cloud passed over the sun, bathing the class in sudden shade. Goose bumps rose on my arms as the temperature plummeted. I flinched when a gust of wind knocked over the legal pad with a thump. The yellow pages fluttered open, sending loose scraps of paper floating toward the lake.
“Suddenly, the God of Winter, Boreas, swept her away in a cloud and . . . ” Professor Homer faltered at the sight of the escaping papers. “Married her.”
I rolled my eyes. At sixteen, it wasn’t as though Melissa and I were clueless about what happened to poor Oreithyia. Beside me, Melissa nodded as though I’d spoken aloud.
Professor Homer continued. “For nearly a century afterward, the people of Athens traced their lineage back to Oreithyia and Boreas, claiming to share the blood of the gods. Can anyone tell me what’s special about this myth?”
“It explains winter, right?” Rachel’s voice drew my gaze past Alex to where she was perched on the opposite end of the short stone wall our class was using as a bench, flanked by Ashley and Jessica.
“Right!” Professor Homer smiled, and every girl sighed. “The ancient Greeks didn’t know why the seasons changed, so they came up with this myth to explain it. Every year, on the anniversary of Oreithyia’s abduction, it grows colder for the length of her captivity.”
A chill crept up my spine. I hated winter. Luckily I lived in Athens, Georgia, where winter was rarely serious until late January and over by April. I thought of Oreithyia, swept up into that cold cloud, and shuddered.

Kaitlin Bevis spent her childhood curled up with a book and a pen. If the ending didn't agree with her, she rewrote it. Because she's always wanted to be a writer, she spent high school and college learning everything she could to achieve that goal. After graduating college with a BFA and Masters in English, Kaitlin went on to write The Daughters of Zeus series.