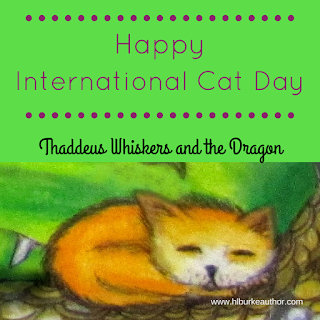 Omgosh! It's International Cat Day! Take a nap, drink some milk, chase a little red dot across the floor, then click the link below and pick up your copy of Thaddeus Whiskers and the Dragon, the next big thing in Kitten and Dragon literature!

Thaddeus Whiskers and the Dragon

Thaddeus F. Whiskers is a pampered palace pet, a kitten enchanted to never become a cat. Princess Clarice loves him, for in the entire kingdom, there is no other kitten as cute or as clever. He leads a life of cushions and cream until a wizard's "gift" results in his banishment. Determined to make it back to the princess he loves, he escapes into the wilderness where he discovers the lair of a dragon. Grandious, the dragon, doesn't care about anything besides himself. He wants to be left alone with his treasure. However, there is something about Thaddeus that has him entranced. He finds himself opening his home and his heart to the little cat. Thaddeus is a small creature in a big world. Between him and his beloved Princess stand conniving wizards, would-be-step-mothers, and rampaging rats. However, when danger threatens both Clarice and Grandious, Thaddeus won't allow his size to get in the way of saving his friends.