Why Financial Transparency Is Important As An Indie 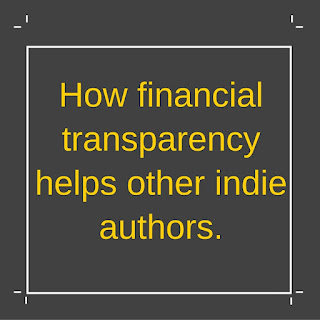 There's a stigma about sharing financial information. It's hard to do it without seeming like you are bragging (or complaining). However, there are ways sharing this information can actually help those who are either starting to self-publish or who are considering self-publishing. This is why many indies are pushing aside the taboos to openly share sales, income, and expenses. Here are a handful of reasons why I think this is a good thing:

So are their any down sides?
Potentially, yes.
Some writers don't want to share for fear of jealousy. This isn't unfounded. There is a small segment of authors who would rather bring down their "competition" than promote their own work. This is probably true in every community, but as authors, we work primarily online where it is fairly easy to torment another individual, leaving bad reviews on their work.  I've seen some people share their details under fake names.
This also has a flip side. Some new writers or writers who have been struggling but not hitting the numbers through no fault of their own, may be discouraged by seeing how well others are doing at the same business.
Also, you could get audited. So pay your taxes.

My main thought is that writers aren't really competing against each other. I've never known an author whose end goal was "I want readers to never read anyone elses' books ever, just mine." We can afford to help each other out, and sometimes that means sharing information about financial aspects.